Grinder Chris Thorburn is a fan favorite for his tenacity; he's backing that up so far this season with his scoring.

Share All sharing options for: Chris Thorburn Shining To Start The Thrashers' Season

Chris Thorburn is already halfway to last season's goal totals; he's netted two on the year, the last one coming Tuesday night in LA. Last season, he had four all year along with nine assists. The center turned right-wing (for right now) hasn't cracked twenty points in the NHL, but he's become a fixture in Atlanta since the 2007-2008 season and has become a fan favorite because of his crash the net style and effective penalty killing.

After his first two seasons in Atlanta where he was moved around and utilized in inappropriate situations (centering Ilya Kovalchuk, anyone?), Thorburn was a -14. The team those first two season here was not the strongest, and the penalty kill was at 78.8% (27th in the league) and 76.0% (29th in the league). The strategies and line combination for the PK those seasons were either non-existent under Don Waddell or in a learning phase under John Anderson.

Last season, however, Thorburn was a +6 and is a +4 so far this season, which leads the Thrashers through three games. It's also good for 4th in the league. Small sample size, I know, but it's indicative of what Thorburn's capable of. He's one of the most defensively responsible members of the team. On top of his +6 last season, three of Thorburn's four goals were short handed. 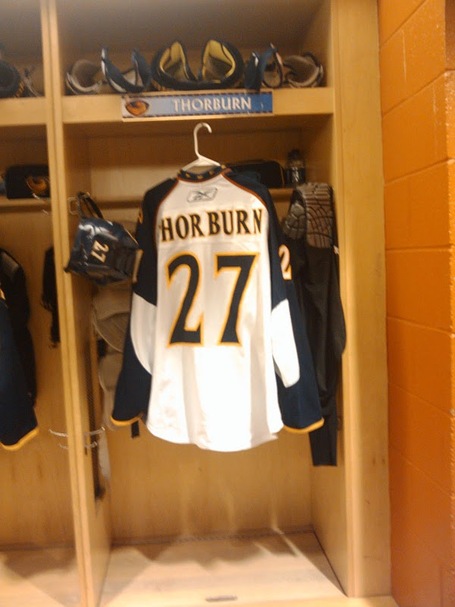 Coach Craig Ramsay expects offense and defense from each of his four lines - he doesn't believe in sorting lines based on talent or ability, but rather on skills. His fourth line thus far this season of Eager-Burmistrov-Thorburn are all defensively responsible, all capable of shoving their way to the net (or will be when Burmistrov puts on some weight), and all capable of scoring when in the right position. There's not a lot of flash involved in Thorburn's game - he drops the gloves when needed and he makes life rough for the opposition's top lines. But what he does is respected by the fans and recognized by the coaching staff.

Thorburn isn't at his best on the top two lines, and that's fine. That's not his role, and the sooner people realize that the better. The former second round draft pick (Buffalo, 2001) is not an offensive juggernaut, but players who grind it out are just as valuable, if not more so. Excitement isn't Thorburn's game, but it's noticed when he's not in the line-up, and that's all a professional hockey player can ask for.

And hey, if BizNasty thinks he's a good guy, that's good enough for me.