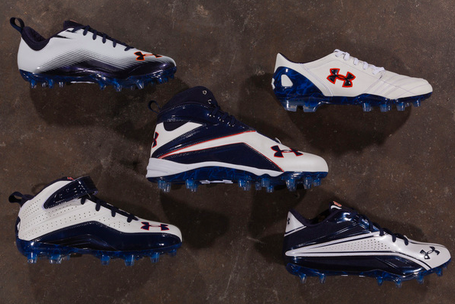 Thinking that one in the middle must be Cam Newton's, as it's got the most prominent Under Armour logo.

That's fancy marble patterning in there, if you can't see it. No doubt Oregon's first-ever national title game uniforms will be colossal spectacles that will cause every male over 40 to spend six minutes talking about Penn State and the Steelers -- after all, they dressed up like this for a game against lowly New Mexico -- but this is their moment, too. Let them be Oregon about it.

Previously in pregame Auburn uniform news, the infamous blue helmet rumor, back when this site still apologized for writing about non-Atlanta sports. Ha! Now we write about Brett Favre!