Via event host Desmond Howard, here's a look at what the Oregon Ducks will be wearing for the BCS National Championship Game against the Auburn Tigers. These bowl unis are being unveiled at a Nike to-do in Dallas, Texas later this afternoon along with those of the Boise St. Broncos, TCU Horned Frogs, and Florida Gators, but Howard snapped a few around noon and decided to share: 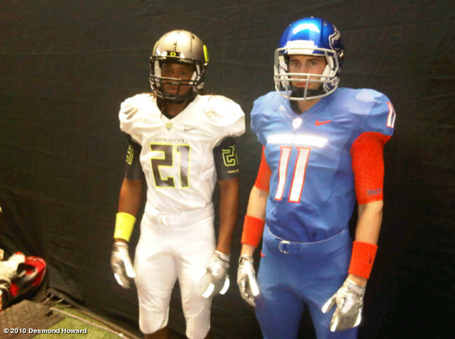 That's nowhere near as outlandish as one may have feared, considering the combinations Oregon has pulled off in the past for non-national games and Nike's SHALL WE SAY bold Pro Combat series, though they do include yellow socks. Looks like a pretty standard Oregon uniform, apart from that helmet, which we'll get a better look at later. 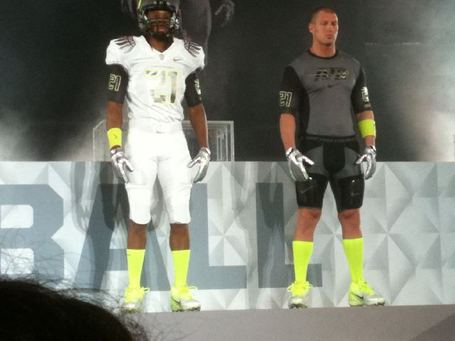 Auburn should be rocking their traditional blue-and-whites, but with marble trim on their cleats. So far, best-dressed has to go to Oregon, if only to encourage them to show up looking like this more often.