We'll find out who's going where tonight some time after 9, but here's an early look.

BCS National Championship, Jan. 10: Auburn Tigers vs. Oregon Ducks. This one is all but set in stone. Both teams have been ranked No. 1 and No. 2 for weeks, and the No. 3 TCU Horned Frogs couldn't have made up the difference even if they'd played yesterday.

Sugar Bowl, Jan. 4: Arkansas Razorbacks vs. Ohio St. Buckeyes. With the SEC champ going to the title game, the Big Ten champ off for the Rose, ACC and Big 12 champs spoken for, and TCU contractually obligated to go to the Rose as well due to weird non-AQ rules, the Sugar can choose between Arkansas, Ohio State, and Stanford. Taking a nearby SEC team makes sense, and Ohio State has a better traveling reputation than Stanford. Plus tOSU taking on yet another SEC team in a bowl equals instant storyline. UPDATE: This one looks to be good to go, based on some promotional images discovered on the Sugar Bowl's website: 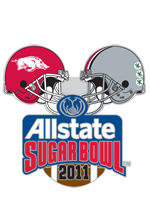 Orange Bowl, Jan. 3: Virginia Tech Hokies vs. Stanford Cardinal. The Hokies are locked in here, due to winning the ACC. The Orange gets to choose either Stanford or UConn to fill the other spot. To avoid being laughed off the map, the Orange has to take Stanford, even if that's a hell of a long way for both of Stanford's fans to travel.

Fiesta Bowl, Jan. 1: Oklahoma Sooners vs. Connecticut Huskies. As Big 12 champ, Oklahoma's all set here. If the Orange takes UConn, the Fiesta will wind up with Stanford, but only a fool would take UConn. UPDATE: Same story here: 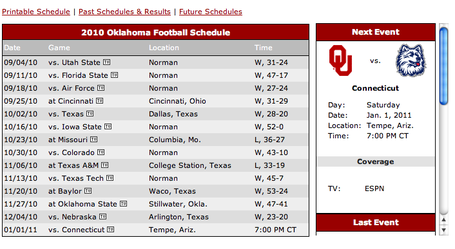 Rose Bowl, Jan. 1: Wisconsin Badgers vs. TCU Horned Frogs. The highest-ranked Big Ten team gets the Rose bid automatically, and TCU gets the other spot by virtue of that non-AQ thing.