Share All sharing options for: Thrashers Acquire Byfuglien, Sopel, And Eager From Blackhawks

In case you were wondering if the Rick Dudley era in Thrashers history was going to be a large contrast to years past, well, your answer came today. Dudley is three steps closer to building the Blackhawks South branch so many people expected when he was hired on as assistant general manager, and promoted to general manager. Today, in a surprise trade, the Thrashers sent center Marty Reasoner and prospect Jeremy Morin, along with the first and second round picks acquired in the Kovalchuk trade to the Chicago Blackhawks for Dustin Byfuglien, Ben Eager and Brent Sopel, along with prospect Akim Aliu.

This obviously helps Chicago alleviate some (though not all by any means) some of their salary cap issues. According to CapGeek.com, Byfuglien is set to make $3,000,000 next year. Eager should get a nice payraise to about $1.25 million, and Brent Sopel is making $2,000,000. The cap floor is about $43 million for this season, and the Thrashers should clear that handily.  Here's a mock roster I pieced together, retaining Clarke MacArthur, Pavel Kubina, and Johan Hedberg (since no one is sure at this point what is going on regarding them): 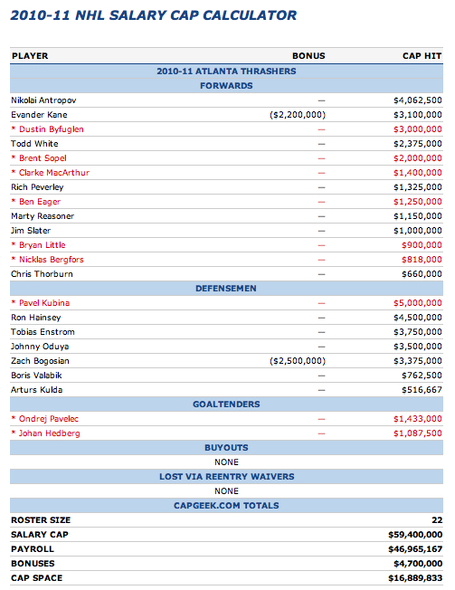 As you can see (and yes, I know I misentered Sopel as a forward - I was in a hurry), we clear the floor by over $3 million with $16 million to spare. The Thrashers have added noticeable size to the team with minimal loss. The pundits and bloggers crying that the Thrashers were hosed by this trade aren't fully thinking things through. First off, we need NHL-caliber players to fill in gaps in the roster. If we trust said holes to prospects, we're still a few years away from playoff contention. We did not need those two picks from New Jersey and they were probably being held as bargaining chips for an opportunity such as this. We also needed toughness - Slater and Thorburn are a nice start, but the addition of the three former Blackhawks gives the forwards some sort of legitimacy when it comes to line matching. We lost a great locker room leader in Reasoner, but we gained three Stanley Cup champions.

And, most importantly, we have turned Kovalchuk, Salmela, Reasoner, and Morin - a superstar who wasn't helping, a seventh defenseman, a grinder, and a prospect with questionable skating speed - into Patrice Cormier, Niclas Bergfors, Johnny Oduya, Dustin Byfuglien, Ben Eager, Brent Sopel and Akim Aliu (who is farther in development than Morin is). Dudley was expected to make a big impact right off the bat, and this is a good start. Next in his crosshairs is a top six forward to replace some of the firepower that might be lost if Afinogenov walks. This should make the draft interesting for more than who the Thrashers choose eighth overall.