The Braves At The Break (A Graphical Summary)

All-Star Break got you down? Try looking at these cool spider graphs that show how the Braves stack up to the rest of the league in various categories.

Share All sharing options for: The Braves At The Break (A Graphical Summary)

As you probably know, Major League Baseball's All-Star Game is tonight. If you (like most of us) don't particularly care about the All-Star Game, you are probably going through some serious sports withdrawal right now. With the World Cup over, baseball on a 3-day break from real games, and no other major team sports currently in-season (sorry, WNBA), these few days in July are the emptiest of the year on the sports calendar.

To give you something to occupy your time, I made some fun "spider charts" that summarize the Braves' season thus far. You may know that they are in first place (4 games ahead of the Mets), but what you may not know is how they got there: what their strengths and weaknesses have been. That is what these graphs will show.

First, a note on how to read these graphs. Each graph focuses on six categories (or statistics). These categories are graphed along six spokes that go from the center of the graph outward. On each graph, you will see a regular gray hexagon with a black border. This represents the National League average in each category. On top of this hexagon is a blue area, which represents the Braves' marks in each category.

On these graphs, bigger (further from the center) is always better. For example, since strikeouts are bad for a hitter, more strikeouts will result in a mark that is closer to the center of the graph, and fewer strikeouts will result in a mark that is further from the center. If a mark is within the gray hexagon, then the Braves are below average in that category; if a mark is outside the gray hexagon, the Braves are above average. In short, you would ideally like to see as much blue as possible on every graph (since that would indicate a lot of above-average marks).

For each category, the Braves' performance relative to the league average is also given, in percent form. A mark of "+12%" means 12 percent above average and a mark of "-6%" means 6 percent below average. 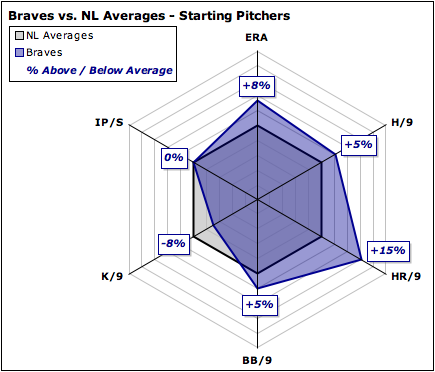 What this chart tells us is that the Braves' starters have been very good overall (above average in 4 of the 6 categories). Their ERA is 8% better than average, which doesn't sound like a lot but is pretty significant. While they do not strike out many batters (8% fewer than average), they also don't walk many batters or give up many hits (both 5% better than average). Their best skill seems to be keeping the ball in the yard, as they give up 15% fewer home runs than the average starting rotation. Braves starters are perfectly average in terms of how deep they go into games.

Now, let's look at the Braves' relievers. For this graph, I've used the same categories except that I replaced innings pitched per start (IP/S) with save percentage (SV%), since relievers finish games rather than start them. 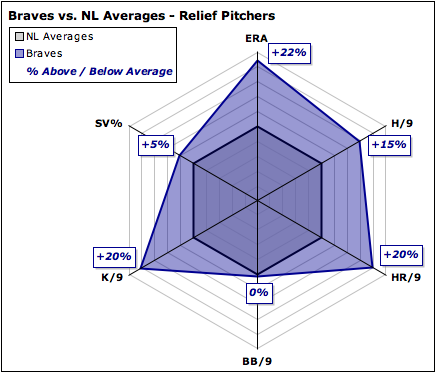 If you're thinking, "wow, that's a lot of blue," you're right on. The Braves' bullpen has been spectacular, as indicated by the huge amount of blue on the graph. Their ERA is a whopping 22% better than league average, no doubt thanks to their ability to strike out tons of batters (20% more than average), give up very few hits (15% less than average), and limit home runs (20% less than average). Given these fantastic totals, the Braves' rate of converting saves, which is "only" 5% better than average, actually seems kind of low. Perhaps they occasionally get themselves into trouble by walking opposing hitters; their walk rate is exactly league average, but if those walks happen at the wrong time, they can obviously be damaging. 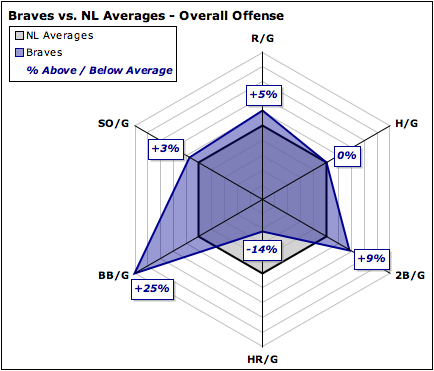 As with the pitching diagrams, we find that the Braves are above average in most areas. Their main weakness appears to be a lack of home run power (a whopping 14% fewer than average). However, the Braves still score 5% more runs than average. While they do not hit many home runs, they do hit 9% more doubles than average. Even more importantly, they walk a TON: 25% more than league average and easily more than any other NL team. Combined with their average number of hits, the Braves put as many runners on base as any team. While a few more home runs to drive those runners in would be nice, it's hard to complain too much about the offense overall.

Finally, let's look at some statistics that measure speed and baserunning abilities. The categories for this chart are: infield hits per game (IFH/G), double plays grounded into per game (GDP/G), triples per game (3B/G), sacrifice flies per game (SF/G), stolen bases per game (SB/G), and stolen base percentage (SB%). 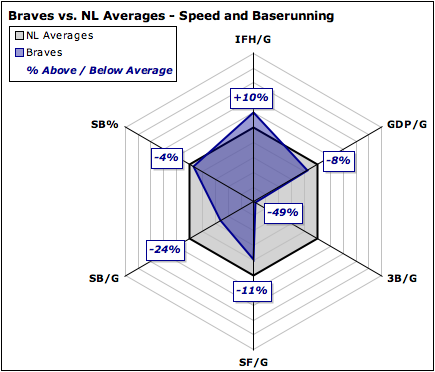 This is the only graph we've seen that has looked at all bad for the Braves, but boy is this one ugly. The Braves rank below average in five categories, and well below average in a couple. Fortunately, these categories are far less important than the ones on the other graphs.

The most glaring weakness that the Braves have appears to be a lack of speed: they steal 24% fewer bases than average and hit only about half as many triples as average. While they do hit into a lot of double plays (8% more than average), they also get a lot of infield hits (10% more than average). This may indicate that, while the Braves are not very fast, they do run as hard as they can when a play is close.

Well, I hope these graphs have helped you to understand the Braves' strengths and weaknesses a bit better... or at least helped you waste a few minutes on a boring day. If you need any further explanation or have any questions or suggestions, please leave them below in the comments.