Braves Catcher Brian McCann Is On A Hall Of Fame Pace

An analysis (with colorful graphs) of Brian McCann's phenomenal career so far. He compares favorably with many Hall of Fame catchers.

Share All sharing options for: Braves Catcher Brian McCann Is On A Hall Of Fame Pace

Even in the midst of what some would say is a disappointing season, Braves All-Star hero Brian McCann has quietly put together some excellent numbers. His .382 on-base percentage ranks fourth among MLB catchers with at least 200 plate appearances; his .455 slugging percentage ranks seventh. He's even been pretty good defensively, throwing out 30 percent of opposing base stealers and ranking 11th (out of 90) in Beyond the Boxscore's catcher defense rankings. Overall, McCann has been the second most valuable catcher in baseball this year, as measured by FanGraphs' Wins Above Replacement statistic.

The fact that these numbers can be considered to be below McCann's expected output is rather remarkable. Braves fans are used to being treated to historic players -- just in the last 20 years, we've seen future Hall of Famers Greg Maddux, Tom Glavine, John Smoltz and Chipper Jones. This season, we've enjoyed watching possible Hall of Fame closer Billy Wagner as well. But it's important that we not be jaded by all of this excellence; McCann could easily join those guys in the Hall of Fame. He has begun his career with five straight All-Star appearances and shows no sign of stopping. That's a pretty historic start.

I created a graph of Brian McCann's last five seasons (counting this one) compared to other top major league catchers. I've used Wins Above Replacement (WAR) because it is a simple and fairly comprehensive measure of a player's overall value. It doesn't include much in the way of catcher's defense (only stolen-base / caught-stealing), but it's the best single number for a comparison like this. If you are unfamiliar for WAR, here is what the numbers mean:

OK, here's the graph. As you will see, only Joe Mauer has been better than Brian McCann since 2006. 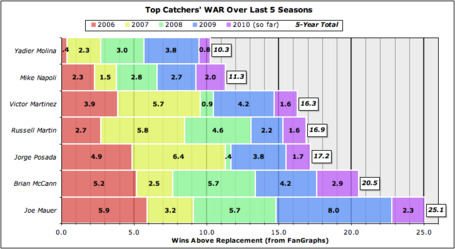 It's not a coincidence, by the way, that all of these guys play for playoff contenders. Getting good production from your catcher is often the difference between a playoff contender and an also-ran.

Aside from his sub-par 2007 season, McCann has never finished worse than a tie for second in WAR among catchers. Pretty good, huh? But just how good is that, historically? Let's compare McCann to some Hall of Fame catchers. There are 13 catchers in the Hall of Fame, though not all of those are good comparisons. Four (Roger Bresnahan, Ernie Lombardi, Rick Ferrell and Ray Schalk) are not really worthy of the Hall of Fame, Buck Ewing played in the 19th century and Roy Campanella started out in the Negro Leagues.

The following chart compares McCann's production through his age 26 season (which is currently in progress) with six of the remaining Hall of Fame catchers: Mickey Cochrane, Gabby Hartnett, Bill Dickey, Yogi Berra, Gary Carter, and Carlton Fisk. The only other one I haven't mentioned, Johnny Bench, was miles ahead of any other catcher during these years. He was (literally) incomparable, with nearly 20 more WAR by age 26 than any other catcher in history. I left him out of this chart because his numbers were too huge. Here's the graph: 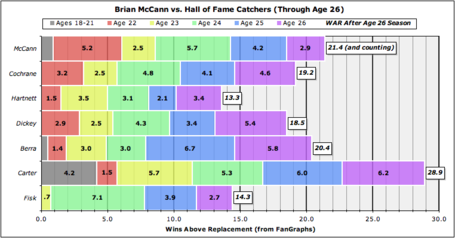 Amazingly, McCann is ahead of five of these six Hall of Famers at this point in his career--and he's still got two-and-a-half months to add to his total. That means that only two Hall of Fame catchers -- Gary Carter and Johnny Bench -- got off to a better start to their careers than Brian McCann. Wow.

Now, none of this is a guarantee that McCann will make the Hall. Ted Simmons and Joe Torre got off to better starts but neither is in (though they should be, and Torre will get in for his managing career). Thurman Munson got off to a similar start but died in a plane crash at age 32. McCann will have to be pretty durable to make the Hall -- maybe not as durable as Ivan Rodriguez or Carlton Fisk, who both were catching well into their 40s, but pretty durable. He'll probably need to contend for a few MVP awards, and he'll also likely need to stay at catcher for another 10 seasons or so. But he's certainly well on his way to getting in the Hall of Fame discussion.