Dawgs Prove They Can Still Hang With SEC's Elite

A.J. Green joins the growing list of players dragged into the agent-contact scandal -- but there may be less here than meets the eye.

Share All sharing options for: Dawgs Prove They Can Still Hang With SEC's Elite

As Mark Richt prepares for today's appearance at SEC Media Days -- during which he is almost sure to be faced with ill-informed questions about whether he's occupying a hot seat heading into 2010 -- he can answer his critics with at least one bit of incontrovertible proof that Georgia remains quite capable of competing with the elite of the SEC. Just one problem: It's in the arena of NCAA investigations into improper agent contact with players.

OK, "investigation" isn't necessarily the right word here: The NCAA's visit to Athens is officially being referred to as an "inquiry." Semantics aside, though, it's an unpleasant development -- if an inevitable one, given that the rumors of improper contact have been spreading like measles through the SEC ever since the NCAA's investigation into potential dirty dealings at North Carolina expanded to include South Carolina tight end Weslye Saunders. The nexus of the "infection" appears to be a party held by an agent in South Beach over Memorial Day weekend; according to ESPN's Chris Mortensen, athletes from as many as 10 SEC schools could be connected.

The fortunate thing (if one can really call it that) in this situation for Dawg fans is that, so far, only one player has been explicitly named as a subject of the inquiry: junior wide receiver A.J. Green. And A.J.'s denials of involvement have been pretty unequivocal.

Reached by phone Tuesday night -- almost a day before the NCAA contacted Georgia -- Green told SI.com that he did not attend the party. Green, who is considered on of the nation's best receivers, said a Georgia compliance official asked him Tuesday if he attended the party. Green said he spent Memorial Day weekend at home in Summerville, S.C.

Whether Green was in a South Carolina exurb or the heart of Miami's party district should be a pretty cut-and-dried thing to check up on, particularly given that reporters have had more than 24 hours to do so. (Green's Twitter feed -- unlike, say, North Carolina defensive tackle Marvin Austin's -- bears no indication that he was partying down in South Beach that weekend.)

In the end, there's probably not a whole lot to lose sleep over from a Georgia fan's standpoint -- it's just another needless distraction in an offseason that hasn't lacked for them. Of course, if it takes away attention from silly questions about Richt's job security, maybe it'll turn out to be a plus in the long run.

And if your mind still isn't put at ease, let A.J.'s former teammate on the receiving corps, Michael Moore, break it down for you: 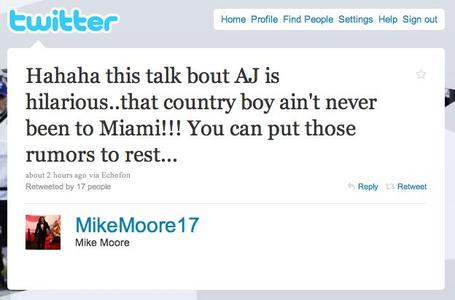 See? Nothing to worry about. The debate over how much the NFL should do to police agents, on the other hand, is a long way from being over.