Are The Braves' Hitters Choking In Clutch Situations?

An analysis (with radar graphs) of the Braves' struggles in clutch situations. Is it just bad luck, or are the Braves' hitters actually performing poorly?

Share All sharing options for: Are The Braves' Hitters Choking In Clutch Situations?

There is a common perception that this 2010 Braves team is sorely lacking in "clutch" hitting ability. Because the Braves have no trouble getting on base (they lead the National League in both walks and on-base percentage); when they do not score many runs, it is often because they are struggling to get hits after those runners get on base. This can be frustrating for fans (and I'm sure for players as well). There's nothing worse than losing a game in which you had many scoring opportunities that you failed to capitalize on. For instance, on Sunday, the Braves loaded the bases in four different innings but scored only one run in those innings (on a sacrifice fly, no less), then went on to lose 5-4 in extra innings.

The question is: Are Braves hitters somehow lacking in clutch hitting skills, or are they merely suffering from bad luck? To find out, I analyzed the Braves' numbers in several situations -- overall, with no men on base, with runners in scoring position, and with the bases loaded. If the Braves' hitters really are "choking" in the clutch, we would expect them to hit worse than normal with runners in scoring position (RISP) and especially with the bases loaded.

First off, let's take a look at the Braves' overall offensive numbers in five categories: batting average (AVG); isolated power (ISO), which is just slugging percentage minus batting average; walk rate (BB%); strikeout rate (K%); and batting average on balls in play (BABIP). BABIP is important because it can be a good measure of hitters' luck. It normally hovers around .300 (though it can be higher or lower for individual hitters), so if a team's BABIP in a certain scenario is much below that figure, it is likely an indicator of bad luck. The fewer plate appearances are involved, the more likely it is that luck is a factor. 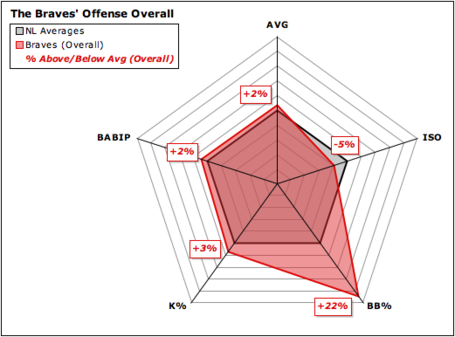 Overall, the Braves have a very good offense. Their main strength is in drawing walks, which they do at an astronomical rate. Their main weakness is in hitting for power, as their ISO is a bit below league average. The Braves also strike out 3 percent less than average and get hits at a decent rate. Their BABIP is a bit above average, but given that the Braves have over 3800 plate appearances overall, it seems fair to say that this figure is due more to skill (i.e., hitting lots of line drives) rather than luck.

Now, let's look at how the Braves hit when no runner is on base compared to how the league hits in the same situations. The pressure should be pretty low here, so you'd expect the Braves to hit fairly well. And indeed, they do. The blue in this graph represents their performance with no runners on base; I've left the Braves overall performance (in red) on the graph for comparison: 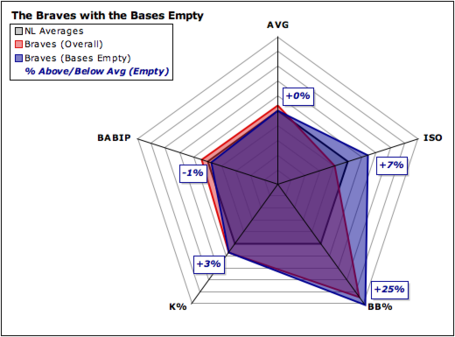 As you can see, the Braves hit more or less as normal when the bases are empty. They walk a bit more and get hits a bit less, but those differences are minor. The major difference is that the Braves -- who hit for below-average power normally -- hit with excellent power when no men are on base. I have no idea why this might be, but this is a fairly large sample (over 2000 PA), so it is probably more than just good luck. Regardless of the cause, this is not the best time for a team to be hitting for power; you'd much rather your guys hit doubles and homers when runners are on base, not when the bases are empty.

Now let's look at the Braves' numbers with runners in scoring position, compared to how the league hits with RISP. If the Braves are truly crumbling due to the pressure of clutch situations, their numbers would be sub-par here: 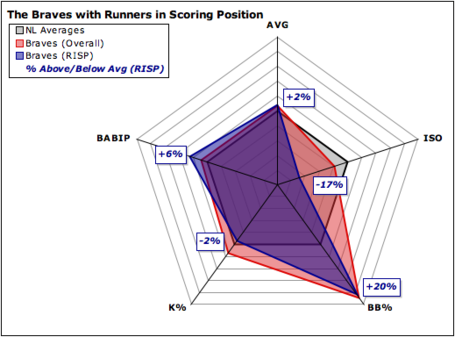 While the Braves' walk rate and batting average are still good here, their strikeout rate is much higher (2 percent below average, compared to 3 percent above average normally). That good batting average is probably somewhat due to good luck, since the Braves' BABIP in these spots is well above average. Even more worrisome, their power drops off a cliff when runners are in scoring position.

I don't know why this would happen, but whatever the reason, the Braves seem to turn into a team of singles hitters once runners get on base. That is a problem, since it limits the number of big innings they have. This is a fairly large sample size (1,100+ PA), but luck is probably still a factor. Perhaps the Braves are getting good luck in terms of singles falling in, but poor luck in that many potential doubles and triples are being caught.

Finally, let's look at what the Braves have done with the bases loaded (again, compared to how the league as a whole does with the bases loaded). This is the most clutch of all situations, so if the Braves cannot handle the pressure, they would really stink in this scenario. As it turns out, "stink" might not be a strong enough term: 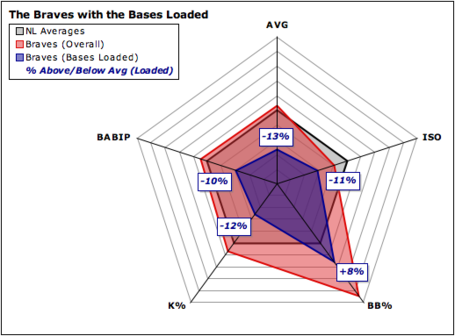 That is just brutal. The Braves have hit much worse in every way when the stakes are highest. Their already poor power numbers go down with the bases loaded (though they have hit four grand slams), their walk rates go way down (though they are still above average), their strikeout rates go way up, and their batting average goes way down. The one upside here is that the Braves have definitely suffered from poor luck. Their very low BABIP, combined with the small number of PA in the sample (only 143) indicate that most of the Braves' poor AVG is due to bad luck. Of course, bad luck can't really explain why the Braves strike out more and walk less with the bases loaded. The blame for that can only be placed on the hitters themselves.

In addition, the Braves also ground into a lot of bases-loaded double plays and don't hit many sacrifice flies. The Braves have grounded into 14 double plays with the bases loaded; the average team has only nine. The Braves have only 8 sacrifice flies with the bases loaded; the average team has 11. This indicates that the Braves are hitting too many ground balls (and not enough fly balls) in these situations. Luck may of course be a factor here, thanks to the small sample size, but this is certainly a negative indicator.

Overall, it is hard to draw any firm conclusions from this data, but you can certainly see how Braves fans would come to be frustrated by the Braves' clutch hitting (or lack thereof). The trends do seem to indicate that the Braves hit better in low-pressure situations and worse in high-pressure situations, particularly when it comes to hitting for power.

I would say that luck is certainly a factor in the Braves' poor performance in clutch situations, but luck is not a completely sufficient explanation for their struggles. Some of these sample sizes are pretty large, and the difference in ISO in particular is more than just a matter of a few hits not falling in. That does not necessarily mean that the Braves' hitters are choking under pressure, though. It could be that they are making strategic adjustments (such as shortening their swings or trying to hit the ball the other way) in clutch situations, but that these adjustments are having an adverse effect.

Whatever the reason, I hope that it turns around soon. This Braves' offense is better than it has been playing lately, and it will probably need to play up to its potential in clutch situations if the Braves hope to make the playoffs.