Which Atlanta Team Has The Best Home-Field Advantage?

According to the numbers, only one Atlanta team has an unusually large home advantage. They don't call it the Highlight Factory for nothing.

Share All sharing options for: Which Atlanta Team Has The Best Home-Field Advantage?

Based on the past fifteen seasons played by the Braves, Dawgs, Hawks, Falcons, Jackets, and Thrashers*, all six teams enjoy a winning-percentage boost when playing at home.

For the four pro teams, I just used straight-up home and overall records. But for the two college football teams, I adjusted for the fact that both occasionally hosted non-FBS teams. Any home game against a FCS team got excluded from both home record and overall record. Thus, we're only counting home wins against actual competition. I didn't look at Tech and UGA hoops because going through 30-game schedules and picking out all the games vs. D-II teams over 15 seasons for both teams sounded like an awful task.

* I only found home records for the last four Thrashers seasons. I could've calculated the home point percentage for all six of their previous 82-game seasons, but that sounds like another awful task.

This is what each team's home winning percentage looks like for the past 15 seasons: 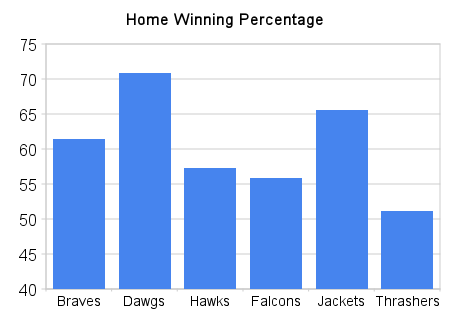 Based on sheer winning, Sanford Stadium has been the strongest home stadium over the past 15 years. Bobby Dodd Stadium comes in second, with Turner Field leading the pro venues. But there's more to it than that.

Home winning percentage doesn't mean much by itself. We need to keep in mind how well each team played overall -- this way we can see how much of a difference playing at home has made. Here's each team's overall (home plus road) winning percentage over the same time period: 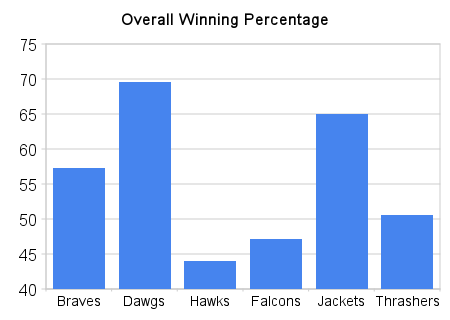 Lower winning percentages across the board, and the Hawks and Falcons have now plunged below the Thrashers.

And here's each team's improved chances of winning when playing at home, as opposed to all games: 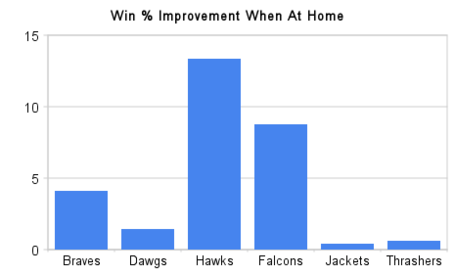 And now we're on to something. First, let's keep in mind the fact that home-field advantages (HFA) aren't the same from sport to sport. According to a study covering 100+ years of data:

Since 1900, notwithstanding some year-to-year swings, MLB home-field winning percentages have been remarkably stable at about .540; (b) the NFL HFA fluctuates a lot, no doubt because fewer games means more statistical noise, but home-field wins are usually in the 55 to 60 percent range; (c) NHL home-ice wins have declined from 60 percent in the 70s to a pretty steady 55 percent since the mid-90s; (d) NBA home-court wins dropped from 65 percent in the mid-80s to 60 percent in recent years, still the highest of the U.S. sports studied.

Going by those numbers, the Braves (4.1%) are right on target alongside other MLB teams (4 percent). The Falcons have a slightly better HFA (8.76%) than most NFL teams, but they're still well within the standard range (5-10 percent). The Thrashers, at least for the past four years, have cultivated less than a fifth (.65 percent). of the HFA of the average NHL team (5 percent) The Hawks, however, racked up a very Ronald Reagan HFA (13.35 percent), soaring over most other NBA teams (10 percent). So the Hawks' HFA, which appeared unusually high when compared to other Atlanta teams', is also high when compared to other NBA teams'.

We have our winner: the Atlanta Hawks have the best home-field advantage of any Atlanta team.

But why? First, let's cover why our two college teams have lower HFAs than you'd expect. Yes, this will help make a little more sense of the Hawks' HFA.

According to one data set, the only home-field factor that has any real bearing on a college football game's outcome is the distance traveled by the road team. Not the stadium size, field color, or fan redneckishness. Since the teams usually playing against Tech and UGA aren't from very far away, this factor doesn't count for a whole lot -- neither for nor against Tech and UGA.

Meanwhile the Braves regularly travel back and forth from New York, DC, and Philadelphia, and the Falcons played San Francisco twice a year until 2002 (in fact, being stuck in the NFC West for 35 years may be a useable excuse for the team's sad history). The Hawks swap hosting duties with distant Miami and DC after years of playing division games against Toronto, Detroit, Milwaukee, and Chicago. Quite a bit farther than Clemson and Auburn, right?

The Hawks' NBA Central Division membership, which ended in 2004, seems to be slightly responsible for their surprising HFA. Home-and-homes with Toronto (900+ miles) can't be easy on either road team. The Hawks' HFA was over 14 percent while in the Central, and down to 12.9 percent since joining the Southeast Division.

Of course, that's still slightly above the NBA average. So, basically, there's something to the Highlight Factory after all. Other than the many algorithms measuring Ryan Cameron's pep, this is as far as math can take us.