As if downtown Atlanta and the Georgia Dome aren't enough of a recruiting advantage over schools like Morehead State, the Georgia State Panthers' brand-new football program is getting some serious national attention.

ESPN the Magazine has been tracking the gestation of Georgia State's program for two years now -- from the construction of its playcalling identity to on-the-scene coverage of former Georgia Tech and Alabama coach Bill Curry's first-ever signing day as Panthers head coach.

This has culminated in a cover feature for GSU North, headlining the magazine's college football kickoff issue. So far, only the cover itself is available: 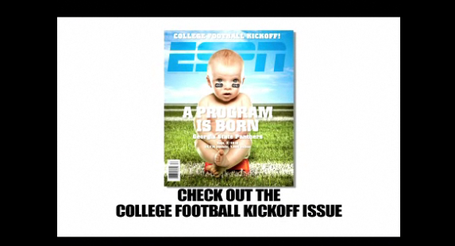 GSU plays tackle football with live babies, and doesn't just get away with it -- no, they get mag covers. How is Shorter College supposed to compete with that?