A rundown on Foursquare, in case you're not familiar: people can share their current physical location with their friends via Foursquare. It's kind of like Twitter, but with places. You earn points and badges for trying new things, and you compete with other people at stuff.

Team Speed Kills, SB Nation's SEC blog, looked into which SEC stadiums were most popular among Foursquarers. Florida's Ben Hill Griffin Memorial Stadium nearly lapped the field, leading the way with 1,142 checkins. The rest of the SEC only turned in 1,494. TOP-HEAVY CONFERENCE. Take a look at their post here.

We tried the same stunt with ACC stadiums, and it's clear why the state of Florida is the nation's second hottest recruiting source: 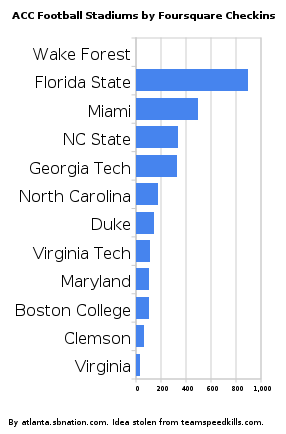 Look at those Floridian Foursquarers go. They can't get to the ACC Championship Game as arranged, but they sure can wield their iPhones. Clemson turns in a disappointing total, and Georgia Tech outperforms Georgia by 163 checkins [nerd joke].

The ACC combined for 151 more total checkins than the SEC despite Wake Forest not playing football, meaning we can add Foursquare bragging rights to our regularly scheduled basketball and in-conference frequent flier mileage boastings. I'm not sure what we're measuring here, but it seems medium-to-big schools with smarty-smart reputations tend to outperform tiny schools and Mississippi schools.