What To Expect From New Braves Pitcher Mike Minor In 2010

The Braves will call up top pitching prospect Mike Minor from AAA Gwinnett on Monday. Based on how similar pitchers have done in recent seasons, what should we expect from him in 2010?

Share All sharing options for: What To Expect From New Braves Pitcher Mike Minor In 2010

On Monday, the Braves will call up Mike Minor, their top 2009 draft pick, from AAA Gwinnett to start against the Astros. Minor has put up a fantastic stat line in the minors: 3.19 ERA, 0.6 home runs per nine innings (HR/9), 3.0 walks per nine innings (BB/9), and 10.9 strikeouts per nine innings (K/9). With those peripherals, his Fielding Independent Pitching (FIP) is 2.64, meaning that he's pitched about a half-run better than his already good ERA would indicate.

Minor will become just the fourth player from last year's class to make the majors, after the Reds' Mike Leake and the Nationals' Stephen Strasburg and Drew Storen. Not coincidentally, all four of those players are pitchers who were drafted out of college. College players need less time in the minor leagues, and the most advanced college pitchers in particular often need little minor-league seasoning. Leake, for instance, skipped the minor leagues entirely.

To determine what kind of performance we should expect from Minor, I compared Minor with other recent pitchers that fit his profile. I found five other pitchers since 2006 who A) were drafted out of college, B) were rated as top-100 prospects by Baseball America, C) were called up to the majors in mid-season, and D) made at least 10 starts in the majors in their first season. Those five pitchers are: Tim Lincecum, Tommy Hanson, Jered Weaver, Brett Cecil, and Jordan Zimmermann.

That's a pretty good group, obviously. Lincecum has won back-to-back Cy Youngs. Hanson and Weaver may have Cy Youngs in their future, too. Cecil and Zimmermann look like solid #2 starters in the future. For Minor to be in a group with those guys is pretty impressive. Let's see how he compares to them:

Obviously, Lincecum kind of skews the averages a bit because he was so unfathomably good in the minor leagues, but as you can see, Minor still compares very nicely with the averages of this group in all categories but ERA. His relatively bad ERA is probably just due to bad luck or poor defense behind him.

In the long term, the fact that Minor compares well with this group is very good news for Braves fans. With Hanson already in the fold, Minor about to arrive, and perhaps baseball's best pitching prospect (Julio Teheran) in AA, the future of the Braves' rotation looks extremely bright. The focus of this article, however, is the short term: how will Minor do this year? To find out, let's see how the five pitchers in our sample did in their first year in the majors:

The "Difference" row shows the average increase in these major-league numbers, compared to the minor-league stats in the first table. Unsurprisingly, these pitchers had a harder time (on average) in the majors than in the minors. While their ERAs fluctuated wildly, most of their FIPs were in the mid-to-high 3's. All of their home run rates went up, some dramatically. All of their strikeout rates went down, most by quite a bit. The difference in walk rate was not as significant, though it too was a bit worse on average.

Let's look more closely at each player, starting with Lincecum:

Lincecum's ERA went up by three runs, and his FIP went up by two runs. Of course, part of this is just because his minor league numbers were so unbelievable; no one can sustain that kind of performance in the majors. Still, it's instructive that Lincecum, who was perhaps the most dominant minor league starter in recent memory, was not a dominating force in the majors out of the gate. He was pretty good, though. (And, of course, he won a Cy Young the very next season.)

Next up, Tommy Hanson:

Hanson's ERA in the majors was indicative of an ace-like performance, though his FIP tells us that he was merely very good, not great. Even those very good numbers, though, are still a fair bit worse than his minor league stats. (This year, Hanson's ERA is higher but his FIP is fantastic; go figure.) 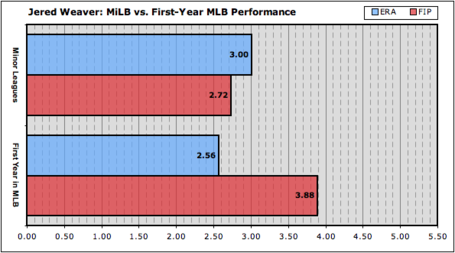 Weaver is a good example of why ERA is not the best way of measuring performance over short periods of time (like partial seasons). Weaver's ERA actually went down in his first year in the majors. His FIP, though, went up by more than a run. That tells us that Weaver actually pitched much worse in the majors than in the minors (which is what you would expect). He merely benefitted from a lot of luck, or obscenely good defense, to get that sub-3.00 ERA. (Accordingly, his ERA hovered around 4.00 for the next three seasons; this season, he's upped his strikeout rate considerably, and is putting up Cy Young-type numbers as a result.)

Cecil represents the worst-case scenario for Minor. His peripheral numbers all got much worse in the majors, particularly his home run rate. Thus, both his FIP and ERA skyrocketed. One mitigating factor is that Cecil is the only pitcher in this sample in the AL East, and thus the only one who had to deal with the powerful Yankees, Red Sox, and Rays lineups on a regular basis. (This season, Cecil has stabilized his peripherals and pitched very well.)

What happened to Zimmermann is kind of the inverse of what happened to Weaver. Zimmermann actually had a lower FIP than Weaver in his first year, but his ERA was two runs higher. Just as Weaver was the beneficiary of good fortune, Zimmermann can largely blame bad luck for his high ERA. (Zimmermann hurt his elbow at the end of 2009 and is about to return from his surgery rehab.)

OK. Let's put all this together. What can we say about how Minor will do? Well, we can be reasonably sure that:

Based on his minor league numbers, I'd project the following peripherals for Minor:

That would indicate a FIP anywhere from 3.21 (which is excellent) to 4.66 (which is mediocre). A mid-range projection would be a FIP between 3.75 and 4.25. That's pretty good, though it's probably not that much better than what Kenshin Kawakami would put up.

Minor gets lucky in that his first start is against the impotent Astros offense. That's about as easy of an introduction to the majors as a guy could ask for. Hopefully, his first start will go well, and will propel him to a successful first season (and career).