Share All sharing options for: Madden NFL 11 Predicts the Atlanta Falcons Will Start 1-0 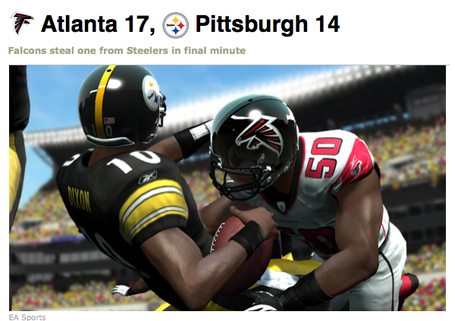 The Atlanta Falcons are about to start the 2010 season with a victory. That's according to the digital swami, Madden NFL 11. The Folks at EA Sports continue the tradition of simulating every NFL game and in this week's installment, the Falcons are expected to edge out the Pittsburgh Steelers in a three-point win, 17-14.

While the accuracy of these Madden predictions are up for debate - meaning I have no idea how accurate they are - video game simulations have always held a special place in my heart.

Michael Turner finds tough sledding averaging only 3.5 yards per carry against the Steelers defense but does finish with one touchdown and 74 yards on 21 carries.

Matt Ryan completes 59% of passes (sadly accurate) and throws for 236 yards and one touchdown. He avoids throwing an interception and leads the Falcons to the game-winning field goal with 56 seconds left - earning player of the game honors.

Roddy White catches six passes for 89 yards and adds a touchdown of his own.

Matt Bryant delivers on a clutch field goal on the road to win the game. This is a good omen.

Dennis Dixon throws for under 200 yards with an interception but adds 43 rushing yards. I could see two INTs in the real action but the rushing yards seems right when he breaks contain.

Rashard Mendenhall gashes the polygon-based Falcons defense rushing for 104 yards and two touchdowns. Here's the deal: No videogame can possibly understand the awesomeness of real-life Corey Peters. That accounts for those inflated statistics.

A close Falcons victory is the most likely outcome and Vegas agrees with their 2.5 point line. I'm on record saying the Falcons will come up short, 27-21, but John Madden won a Super Bowl and I play video games, so place your bets accordingly.