Touring College Football Saturday In Atlanta, From GameDay To The Dome

Share All sharing options for: Touring College Football Saturday In Atlanta, From GameDay To The Dome 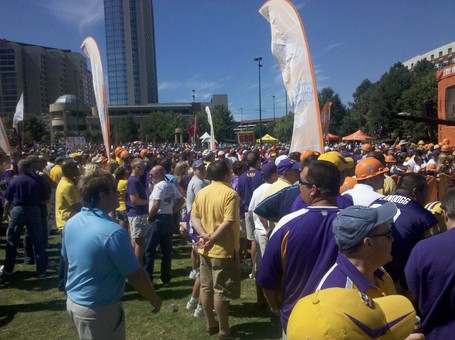 On the way to the Georgia Tech campus, SB Nation Atlanta awarded 2010 Best DragonCon Costume to the celebrants who gussied up their entire car: 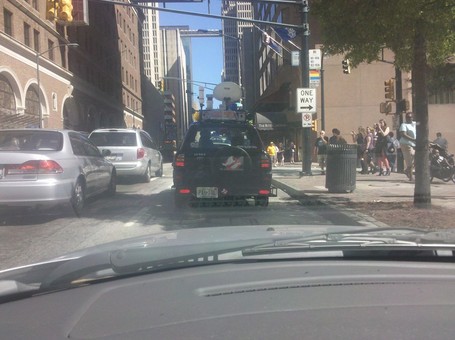 Sonny's for lunch, and speaking of anachronistic vehicles customized by scifi fans, Bobby Dodd Stadium's crowd was a total embarrassment as the game wore on. When Jeff Schultz tweeted the following, he was being kind:

Tech up 34-10 after 3 quarters. If you sneak into the stadium now, you can probably get on the 50, 15 rows up. Just sayin'.less than a minute ago via TweetDeck

There was actually an extended family's worth of front row seats available, and it had been like that since halftime. The end zone areas remained populated and vocal, and the west stands stayed pretty well-stocked, but the precious billionaires in the puffy gold east stand seats retreated to their Tuxedo Park yachts at the sun's first dip below umbrella level. This isn't an infrequent event, but still.

Speaking of halftime at the Flats ("Speaking of" streak: 2X), South Carolina State's band and cheerleaders never, ever stop working. And those girls aren't just doing crossing-guard arm motions like your standard college cheerleader. We're talking constant, potent, hip-powered movement at all times. And the excellent Bulldog band seemed to pick up its output as State fell further behind, at one point rocking through an entire Tech offensive series. The home crowd didn't really seem to mind, having given the band a standing ovation for its halftime Michael Jackson medley and unexpected but extremely classy tribute to Nick Rogers, a former Tech linebacker who died in May.

Tech's offense looked fine. Joshua Nesbitt may miss Demaryius Thomas even more than we've feared, but the running game hasn't missed a step after looking around for a Jonathan Dwyer-shaped widget and throwing it under the hood. Anthony Allen's stats suggest he had a bad day, but South Carolina State's entire plan was to take away the dive. They succeeded, at a pretty heavy price. Tech's defense on the other hand ... well, this is why you schedule South Carolina State in week one.

CNN Center: also Tiger Country, but the Great Wraps appears to be the Tar Heel Protectorate.less than a minute ago via Seesmic for Android

At Dantanna's we were awash in purple. The game of primary interest was Jacksonville State's stalking comeback at Ole Miss. While absorbing 2008 Chick Fil A Bowl jokes (and a "HEY YOU TECH GUYS MUST BE LOST" puzzler from across the sidewalk -- I was born here, my man, and welcome to Atlanta), we surveyed Tiger fans on whether they think of Ole Miss as a rival team. They claimed they didn't, but their spontaneous, full-volume, and unanimous GO TO HAYLL, OLE MISS, GO TO HAYLL chants suggested otherwise. One of the most amazing endings I've ever seen, and I'm glad we got to witness it alongside totally non-biased observers, even if they refused to participate in my postgame S-E-C! chant. 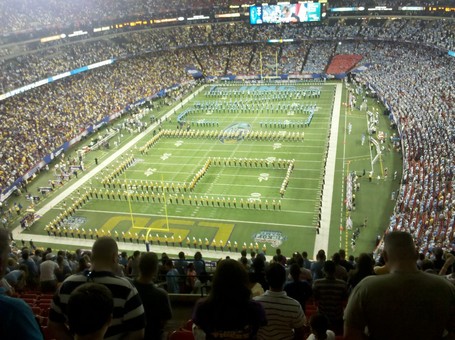 The Georgia Dome home of the still-undefeated Georgia State Panthers was more evenly split than the city's fashion choices and vocalizations had led us to believe. We sat in a cluster of Tigers that had slipped behind enemy lines. After spending ten minutes debating who to root for, we realized Tech's strength of schedule trumped all else -- go Heels.

Chick Fil A had slipped a coupon for a free spicy chicken sandwich in each seat, and it didn't take long for our Tiger neighbors to mine empty seats of their treasures ("That recession's on, and I gotta eat!"). I rolled out with nine days worth of lunch tickets myself, but more than one jeans-shorted fellow fan looked ready to make it rain.

The main event was the ugliest football game I've ever seen. Having to slide six special teamers into starting spots ended up hurting North Carolina's kicking game more than it hurt its defense. By the second quarter, every play was a chance for us to try and predict what else could possibly go wrong. Props to the Carolina fans who stayed loud until the end, even giving their team a huge round of applause for successfully punting the ball out of bounds at one point.

Outside, DragonCon's foot traffic was becoming indistinguishable from Black Gay Pride's in the city that college football has chosen as its jumpoff point for three years in a row. Once again, thank God for making Atlanta.

Matt sums up the weekend:

Atlanta welcomed me back this weekend and I welcomed college football back.  When not touring the city by foot, I stayed busy by attending the Georgia State, Georgia Tech, and Chick-Fil-A games.  Georgia State started something new, drew out the emotions, and pleased the crowd with its fair catch capabilities.  The team looked much better than I expected and raised my hopes of what the program could become.  Georgia Tech easily defeated South Carolina State, but did not make me feel much better than last season about their defense.  Additionally, I am now concerned about the (obviously minimal) passing game.  The Chick-Fil-A game reminded me how important special teams are and made me much more comfortable with the GT-UNC matchup.
And how about that Jacksonville State victory over Ole Miss?  Superb finish.  All in all, it was a great kick-off weekend.  I learned a new chant ("go ta heyll Ole Miss, go ta heyll"), I gained a new sunburn, and I saw two Atlanta based teams get their seasons started on the right foot.  Bring on week 2.