Now seriously, New Orleans: What is David Simon going to say about this? 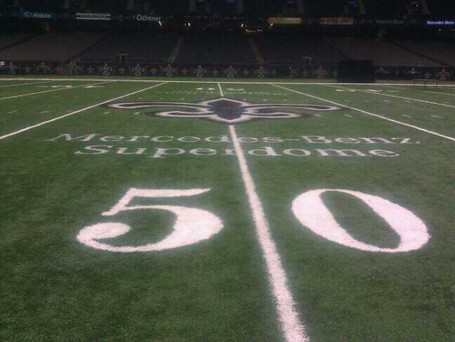 Frankly, we're stunned that the cultural stewards of New Orleans and the state of Louisiana would allow the home of its most beloved* sports franchise (*since 2006) to be corporatized in such a regular, boring old way... like, say, the rest of America, New Orleans might say.

We'd also like to point out at this time that home of the Falcons is free of corporate sponsorship, and Turner Field is one of the rarest examples of apt venue "sponsorship": if not for Ted Turner, the Braves would never become one MLB's elite teams and capture a World Championship in 1995. Sure, there's Phillips Arena, but we think that's just for concerts and conventions and that no sporting events happen there. We're pretty sure about that.

But hey, Atlanta's never spent its entire existence simultaneously beating its chest to tout its singular uniqueness among every other city in the world while simultaneously shaming the nation into providing tourism dollars and explaining away responsibility for its crime rate with cultural anthropology and HBO.

We kid. Sort of. But as your rival, we're less than plussed to be attaching a luxury car fleet to any and all mentions of the site of Altanta's future Super Bowl win in 2013. And frankly, Louisiana provides enough unique and attractive businesses in one parish to solve the Superdome's sponsorship issues. Alas, we'll never see Monday Night Football in a venue that could've been nicknamed "The Bag O' Crawtators" or "The Purple Haze."

Also a worthy contender? One of the Falcons' most prolific Twitter tormentors, Basin Street Records:

That's one thing we can agree with a Saints fan about: The world needs to listen to more Rebirth Brass Band and Kermit Ruffins.