New York Islanders At Atlanta Thrashers: Back To Real Hockey With Playoff Position On The Line

Share All sharing options for: New York Islanders At Atlanta Thrashers: Back To Real Hockey With Playoff Position On The Line

Neither the Thrashers or the Islanders have had good luck recently. The Thrashers have gone 3-4-3 in their last ten games, and have only won five times in seventeen games. The Islanders are 2-7-1 in their last ten and are in the midst of a three game losing streak. The difference between these two teams, though, is that the Islanders have the second worst record in the NHL and will more than likely, barring Divine intervention, miss the playoffs again. The Thrashers, though, are still in eighth place in the East, even after an awful January. The Carolina Hurricanes sit just one point behind the Thrashers, and also play tonight. If they defeat the Bruins and the Thrashers lose to the Isles, the Thrashers are out of the playoffs just a month or so after being first in the division. They now trail the Tampa Bay Lightning by ten points.

Obviously, this is an important game for the Thrashers. The All-Star break came after a very solid 1-0 win to end the season series against the Washington Capitals. The game was an excellent group effort and probably Zach Bogosian's best game in months. Of course, it's hard to sustain that pressure after five days off, so the Thrashers hopefully didn't lose that mindset while on the beach or wherever they were. The Islanders are a good team to get that mindset back with, but the Thrashers tend to have difficulties with the Isles. The last time they were in Blueland on November 21st, they forced an overtime in which Dustin Byfuglien smashed the game winner home past Rick DiPietro. On December 11th, they defeated the Islanders in a 6-4 back and forth tilt that saw four goals scored in the fourth period.

The Islanders are nothing if not fighters. The team has a lot of solid young talent, as evidenced by Matt Moulson re-signing with the team for a three year extension. It's raw, but it's there - it just has to be put together and polished, and the Islanders seem to want to try to do that against the Thrashers. The Thrash get a break, as Islanders defenseman Milan Jurcina is out with an upper body injury, and defenseman Mark Streit has been out the whole season. Of course, the Islanders get a bigger break, because defenseman Tobias Enstrom will be out for another week or two with a broken finger, and no time-table has been released for concussed center Jim Slater's return. Chris Mason is also still out with a torn ACL in his left knee.

Luckily, Evander Kane returns tonight. The Thrashers have sorely missed Kane's scoring touch and the grit and passion he brings to the game. Kane's been injured multiple times, starting with the Thrashers 6-3 loss to the Pittsburgh Penguins on December 28th, and then again in the Thrashers' 6-1 loss against the Dallas Stars. Finally, he was shaken up on a check to the head by Florida Panthers forward Rostislav Olesz in the Thrashers' 3-2 win on January 17th. Kane, despite missing so many games, is still tied for third in goals on the team with thirteen along with Bryan Little and Rich Peverley. With Kane back, Eric Boulton is tonight's healthy scratch per Chris Vivlamore, as the team needs to score against the Islanders to get the upper hand, not fight.

Of course, apparently Islanders fans need to get the upper hand with their ladies. 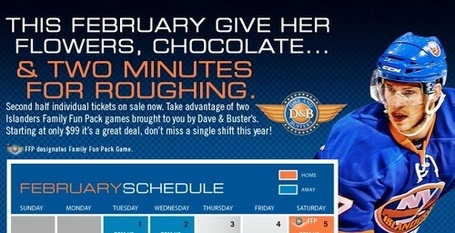 Well, huh. I'm wondering who gets the two minutes - her honey, or her for popping her honey one when he gives her Islanders tickets for Valentine's Day.