My first vivid memories of the Super Bowl are from Super Bowl XXII with the Denver Broncos losing to the Washington Redskins which means when the Green Bay Packers and Pittsburgh Steelers kick-off Sunday it will be the 24th Super Bowl I've seen. Though it's not my fault I didn't make it in the "Every Super Bowl Club". I was born in 1978.

With the 44th incarnation of the Super Bowl - the kids are calling it XLV - only days away there's no better time for brief history lesson on the biggest sporting event of any year. And away we go.

This is the first time the NFL's biggest game is being held in Arlington but the second time the game has been played in Texas. Super Bowl XXXVIII was played in Houston when the New England Patriots beat the Carolina Panthers, 32-29.

Miami, Florida has seen the most Super Bowls with 10. Second-place is New Orleans, Louisiana with 9 then Pasadena, California with five. And I present this Google Map I whipped up showing the locations a Super Bowl has been played. Click to embiggen. 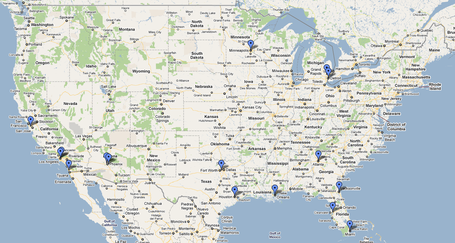 This is the eighth Super Bowl for the Steelers and the fifth one for the Packers. The Steelers are 6-1 in their previous seven games while the Packers are 3-1. With 13 combined Super Bowl appearances, Pittsburgh and Green Bay have played in just under 15% of every game.

The eighth appearance by the Steelers ties them with the Dallas Cowboys for most all-time. The Packers fifth appearance moves them into a tie for fifth-best behind only the Cowboys, Steelers, Patriots and Broncos.

The spread for this year's Super Bowl is somewhere around 2.5 to 3-points in favor of the Green Bay Packers. The biggest pre-game spread was 18.5 points in Super Bowl XXIX. The San Francisco 49ers covered that to beat the San Diego Chargers, 49-26.

We all know the biggest upset all-time was the New York Jets beating the Baltimore Colts in Super Bowl III but the biggest upset in the past 10 years was the 14-point underdog New England Patriots ambushing the St. Louis Rams in Super Bowl XXXVI. Those Patriots were even more of an underdog than the New York Giants were after the 2007 season (12 points) when the Patriots failed to complete their perfect season.

The underdog has won the game only 12 Super Bowls or 27 percent. The favorite has won 73 percent or 32 of the 44 Super Bowls. However, the underdogs are 2-1 straight-up in the last three games.

The average spread for all 44 super big games has been 7.6 points. The average over/under has been 43.6 points.

The Browns have come the closest. They've reached the conference title game five times and came the closest to winning in 1986 but lost to "The Drive" by John Elway and the Denver Broncos. In fact, of their five trips to the conference championship, they've lost three times to the Broncos.

The Jaguars were just a game away in both 1999 and 1996 but came up short in each. The Lions made it to the conference championship only once in 1991 but were blown out by the Washington Redskins. The Texans have never reached the playoffs.

The End as we know it?

And last but not least, this will be the first Super Bowl without cheerleaders. Madness!