Travis Hall, Falcons: The Greatest No. 98 In Georgia Sports History

Share All sharing options for: Travis Hall, Falcons: The Greatest No. 98 In Georgia Sports History

In 45 seasons, our beloved Atlanta Falcons haven't exactly been a hotbed of defensive tackle talent. And that's being generous. The Falcons are one of only five teams in the NFL to never have a defensive tackle named First Team All-Pro. They've also only had one Pro Bowler at that position (Roderick Coleman, 2005). Which brings us to former Falcons defensive tackle, Travis Hall. Despite the lack of accolades, Hall is arguably the best defensive tackle in Falcons franchise history - though some may side with Mike Lewis - and he makes our list as the best player in Atlanta sports history to wear No. 98. 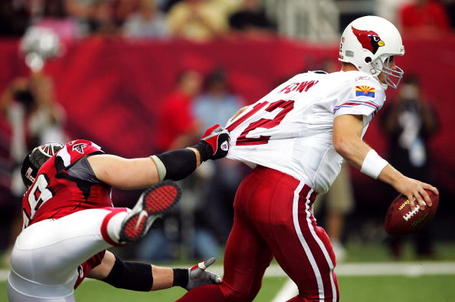 Hall joined the Falcons after being selected in the sixth round of the 1995 NFL Draft (the Warren Sapp draft). Hall played 10 seasons for Atlanta and accumulated 41.5 sacks which was the third-best total in franchise history when he joined the 49ers as a free agent after the 2004 season. John Abraham has since passed Hall, moving him to fourth on the Falcons' sack list.

Through 2004 (Hall's last season as a Falcon), the Falcons made the playoffs eight times as a franchise and Hall was a part of four of those teams. He was a starter on the 1998 NFC Champion team alongside Shane Dronett in the middle. That team was the second-stingiest run defense in the NFL allowing only 3.3 yards per rush. It was also the second-lowest in Falcons franchise history.