Georgia Tech Yellow Jackets DE Pat Swilling was inducted into the College Football Hall of Fame last spring. After his time in Atlanta, Swilling left Tech as the program's all-time sacks and tackles for loss leader. He also set the NCAA's record for sacks in a single game, bringing down N.C. State Wolfpack QB Erik Kramer seven times in one contest. 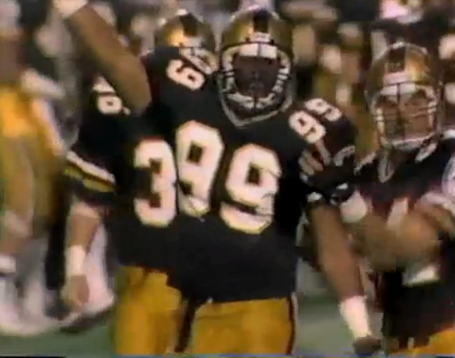 Swilling was the heart of the "Black Watch" defense that allowed only 10.7 points per game in his senior season and had fans of the White and Gold rocking black. He'd stick with that color scheme in his pro career, going on to become the 1991 NFL Defensive Player of the Year as a member of the New Orleans Saints, but we won't hold that against him for much longer.

Perhaps his most memorable moment as a Jacket was his fumble recovery against Michigan State that clinched Tech's only bowl win and ranked finish of the 1980s.

He played over a decade in the NFL, finishing No. 17 all-time in career sacks, going to five Pro Bowls, and being named first-team All Pro twice. After his football career, he was elected to the Louisiana State House of Representatives.