Patrick Kerney, Falcons: The Greatest No. 97 In Georgia Sports History

Share All sharing options for: Patrick Kerney, Falcons: The Greatest No. 97 In Georgia Sports History

Patrick Kerney is the greatest No. 97 in Atlanta sports history. I wrote a 760-word eulogy when Kerney retired last April so I'll no doubt be plagiarizing myself as I write this today but I won't sue myself so it's cool.

Where to begin? Kerney was a first round draft choice for the Atlanta Falcons in 1999 after an All-American career at the University of Virginia. He played eight seasons with the Falcons - starting 105 consecutive games at one point - and was named to the 2004 Pro Bowl and honored as Second-Team All-Pro by the Associated Press. 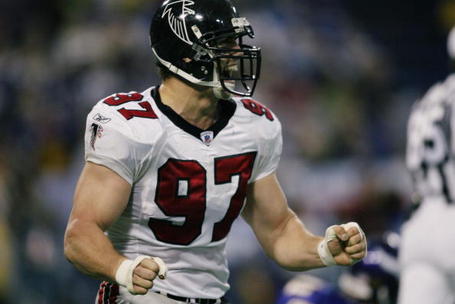 Between 2001 and 2007, only five players recorded more sacks than Kerney (67.5). Kerney led the Falcons in sacks in three of his eight seasons with the team. He left the Falcons as No. 2 on the franchise's sack list, just a half sack behind Chuck Smith and 16.5 ahead of No. 98 on our list (Travis Hall).

He ended his career with three seasons with the Seahawks and earned another Pro Bowl bid and his only First Team All-Pro berth. Injuries eventually caught up to Kerney and he was forced to shut it down after 11 seasons in the NFL. When he retired his 82.5 career sacks ranked 30th among defensive ends in NFL history.