Georgia Tech Yellow Jackets DT Joe Anoa'i was a 2007 All-ACC first-teamer who spent some time with the Minnesota Vikings and Jacksonville Jaguars, but he's also a future pro wrestling star. It's in his blood, son, and at the moment he's scrapping as Roman Leakee in the WWE's Florida Championship Wrestling. But anyway, back to football. 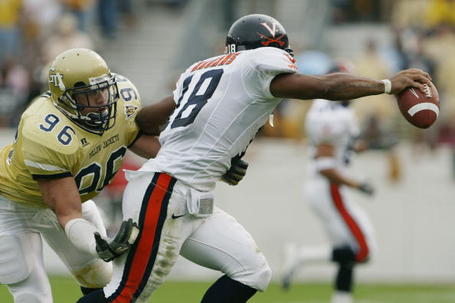 Anoa'i was a three-year starter for the Jackets and a defensive captain, the centerpiece of those balls-crazy Jon Tenuta defenses that actually somehow worked more often than not. He had a ferocious streak, to which Brandon Cox will attest, and which certainly serves him well in his ongoing professional career.

With 12 career sacks and 29.5 tackles for loss, he was one of the best defensive tackles the Flats produced since Rock Perdoni in the early '70s. And certainly the best grappler in Georgia Tech history, other than former hoops assistant John O'Connor.