Share All sharing options for: Fight Night Champion Trailer, Boxer Ratings Present Evander Holyfield How We'd Like To Remember Him 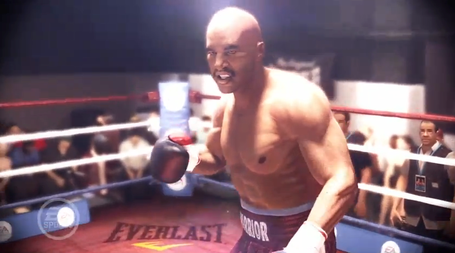 Boxer ratings for the upcoming Fight Night Champion boxing video game have been released, with Atlanta's Evander Holyfield ranking third among all heavyweights, behind only Muhammad Ali and Mike Tyson. He's rated a 90, putting him ahead of Joe Frazier, George Foreman, and other heavyweight legends, and towards the upper tier of the entire roster.

While all-time rankings are perhaps more debatable in boxing than in any other sport, it's still nice to see Holyfield's prime hasn't been forgotten. For many Atlantans, Holyfield was the only reason to ever emotionally invest in boxing, other than, well, joining in on being awed by Ali or Tyson.

Andre 3000 references a crowd's reaction to Holyfield winning a fight on OutKast's 1998 Aquemini, recorded during the second peak of the champ's career. Before he spent the next decade (and counting!) becoming more associated with financial woes, boxing far past his expiration date, and steroid allegations, Holyfield gave Atlanta pro sports championships even before the Atlanta Braves won the 1995 World Series.

His Sega Genesis video game from like 1996 was the easiest game in the world, too. Just make your guy as fast as possible, and then you can link together infinite combos against any boxer by alternating between head and body shots. This entire post has been about the mid-'90s. Thanks for listening.