Marco Coleman of the Georgia Tech Yellow Jackets or Jonathan Babineaux of the Atlanta Falcons. This was a tough one. Coleman was Tech's all-time sacks leader despite only playing three seasons, helped lead the team to a national championship, and played his way into a first-round pick by the Miami Dolphins.

But Babineaux might've been the best player on the Falcons roster over the past three seasons, and was arguably the league's best defensive tackle in 2009. Still, he hasn't gotten attention outside of the town he plays in, while Coleman did. 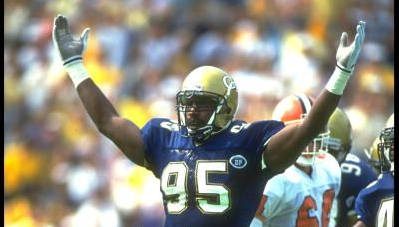 During his time at Tech, Coleman earned All-ACC and second-team All-American honors. He did go on to play 14 seasons in the NFL and make a Pro Bowl, too. This one isn't easy, as Babineaux is one of my favorite football players right now, but Coleman's impact on the city hasn't been topped by very many defensive linemen.