Senators At Thrashers: Thrashers Face Another Last-Place Team And Hope For A Decent Outcome

Share All sharing options for: Senators At Thrashers: Thrashers Face Another Last-Place Team And Hope For A Decent Outcome

The last time that the Thrashers faced a last-place team, it was last month in Edmonton. They skated confidently and held a 3-1 lead on the strength of a beautiful goal by Evander Kane - and then promptly surrendered a natural hat-trick to Taylor Hall en route to a 5-3 loss.

Moral of the story? Don't get too confident when you're playing a last place squad; get even less confident when you hold a lead. There's a reason, too, the Sens are in last place. They're not bad - in fact, they have a better record than the Thrashers do in their last ten games (4-5-1 versus 2-6-2). New goaltender Craig Anderson has been outstanding since being acquired from Colorado for goalie Brian Elliot, going 3-2-0 since the deal. The main issue with the Sens is injuries. Captain Daniel Alfredsson is currently in injured reserve. Goaltender Pascal Leclaire has been hurt. Key pieces have been missing from the line up. Let's look at the current line-up of forwards, courtesy of my good friend Ryan Classic of Silver Seven: 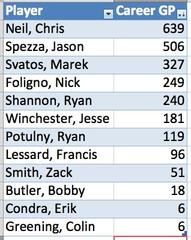 Some of the numbers might need to be tweaked. because this was made before the other evening's games, but the point is still there. Factor in the fact that defensemen like Sergei Gonchar are currently out, and you get a decent idea why the Senators are struggling.

The Thrashers, however, have no excuses. They've been positively putrid for two months straight, going from awful play and an imploding PK to tightening up the PK a little bit (more so over the past four games) and shooting like mad - but not being able to buy a goal. It would be helpful if the Thrashers would pick better spots to shoot from - Carey Price said most of the shots were length ones that were easy for him to see and to stop - but hey, shots are better than just sitting there.They've had over 40 shots on goal in their past four games.

The last three times these teams met at Philips, the Thrashers have scored six goals in each and have won. That might be difficult to do with Anderson in net, but it would be an amazing boost to the waning playoff hopes of a sputtering team that once showed so much promise.

Chris Mason gets the start for the Thrashers again tonight. As Chris Vivlamore reminds us in his interview with Mason, the goaltender carried the Blues down the stretch on an amazing run to the 2009 playoffs, taking them from second to last in the Western Conference to 6th place. There are a lot of similarities between this Thrashers team and that St. Louis team - youth, speed, dedication, and Mason. There's also a huge difference - a cohesive defense and a penalty kill that can each allow fewer quality shots. But the Thrashers are closer to a playoff spot than the Blues were. Of course, there's less time to right this sinking ship.

Senators At Thrashers: Thrashers Lose To A Scrappy Senators Team