You remember the song officially titled "Crank That (Soulja Boy)" by the Atlanta artist officially named Soulja Boy Tell 'Em. It came out four entire years ago, back when people still played the Wii. We all learned at least part of the dance in 2007, and in the 2007 football season a bunch of players used it for their touchdown dances.

Travis Barker did a remix, as did everybody on YouTube, while Soulja Boy went on to have a surprisingly successful multi-song career and helped popularize the weirdest rapper of our time, and that was that. But then! 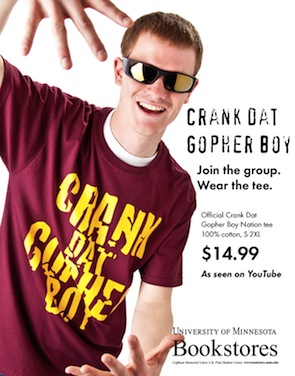 That's apparently an actual item actually for sale in the University of Minnesota's bookstores right this moment, as you can gather from the bottom right portion where it says "University of Minnesota Bookstores." We'll ignore the issue of the young man's sunglasses and that YOU WOULDN'T STEAL A CAR SO WHY COPY MOVIES font, while instead wondering why they didn't just have him do the actual dance for the photo and the enjoyment of all humanity.

For the actual cutting edge in Gophers sports, visit The Daily Gopher and SB Nation Minnesota.