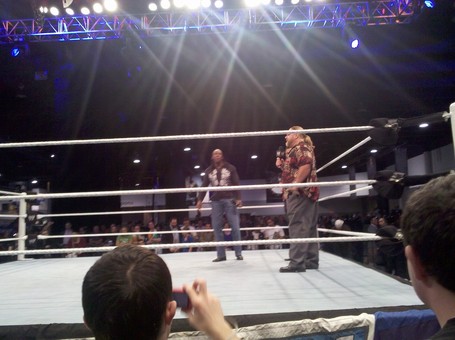 Booker T and Bill DeMott entertained a Q&A in the ring set up at the Georgia World Congress Center's WWE WrestleMania 27 Axxess fan event. Booker T, whom I am stunned to discover is not actually from Atlanta, was asked about his pro wrestling career standing. He stressed he's not "officially retired," and says he'll be back "in the middle of this ring just one more time."

Probably not that specific ring, unless that's the WWE's only ring. Actually, that sounds more plausible than there being a dedicated Georgia World Congress Center ring for pro wrestlers. The ring also saw a couple of matches early in the event, featuring The Corre and the Great Kali at various points.

Everybody in here is wearing title belts. Kinda want to trade media credential for a title belt.

For more on WrestleMania 27 and pro wrestling, join SB Nation's Cageside Seats. Browse our family of 300 sports blogs to find a community devoted to your favorite team. And here's the WrestleMania 27 match card and weekend schedule.