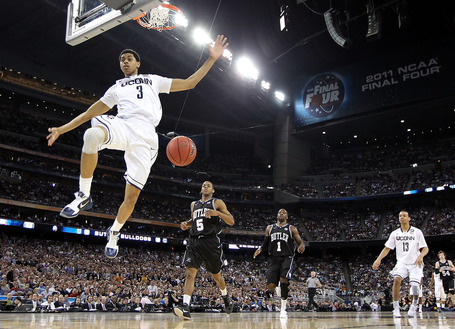 The Connecticut Huskies won their third college basketball national title in the past 13 years, outlasting Butler in perhaps the ugliest NCAA Tournament game ever. It's served to draw more attention to Jim Calhoun's pending suspension, sends Kemba Walker out on a high note (but not that high), and means a second-straight title game loss for Brad Stevens. Which, in turn, means that blank N.C. State check is already in the mail.

On the year, Lamb finished with a 11.1-point, 4.4-rebound per-game stat line. His regular season was off-and-on, as was UConn's in general, but his strong postseason has suddenly whipped up NBA Draft talk.

For more on the win, visit The UConn Blog.