A People's History Of The Atlanta Thrashers: 10 Most Memorable Moments

The Thrashers, who are rumored to be moving to Winnipeg come Tuesday, haven't been here for long - but the franchise's been the subject of misty recollections the past week or two.

Share All sharing options for: A People's History Of The Atlanta Thrashers: 10 Most Memorable Moments

The Thrashers don't exactly have a storied history. Members of the NHL for just eleven years - and without a single playoff win to claim - they're often written off as NHL also-rans. With their impending move to Winnipeg possibly just days away, the memories have come flooding back for some. All you had to do is attend the tailgate on Saturday to see how much people adore this team. Ticket albums, programs, flags, autographed jerseys from players who are long gone... they were all on display proudly. Say what you want about the team, or Atlanta as a sports town, but the Thrashers' fans are a tight-knit little family, and they're fiercely devoted to their team.

Ask anyone what their favorite memories are, or most indelible memories, and you'll get a hundred different answers. This is my top ten list. Not all are good memories - some of them are cringe-worthy, and some are flat-out sorrowful. If you have any to add, please do so in the comments. Winnipeg-bound or not, this is still our team.

It's not a good memory. It's not even really technically a memory considering that we're living the nightmare right now. But like it or not, what's going on right now is a culmination of a series of probably unavoidable events. If only the NHL had vetted their owners better. If only David McDavid were allowed to purchase the team. What if the Atlanta Spirit Group had some concept of running a business? What if any of them gave a damn about hockey? Some people are making the drama into a reflection of Atlanta as a sports town or Atlanta as a hockey town. That's not true. But it's something that the fans've been dealing with since the team was announced in 1997.

They're still the two best attended games of the season, usually. But do you remember how excited people were for hockey season to be back that they packed Philips Arena for the home opener? Or how folks realized that April was it, so they better get to that game and cheer for the players during the "Jerseys off our backs" ceremony? Yeah, me too.

Ok, it's not exactly a moment, per se, but what would hockey be without the pre-game meetups and beer at the Gorin's in the CNN Center. It was about more than $6 36oz beers. It was about sitting around with your fellow fans chatting about the game, catching up with friends... just an hour or two more to spend with your hockey family. If the team leaves, I might miss this ritual most of all.

It's rare that the Thrashers can pull off an off-season trade (or any trade) that doesn't leave the franchise worse for wear. The Hossa trade was atrocious in retrospect, the only remaining pieces from the Kovy trade are Johnny Oduya (woo) and a broken Patrice Cormier. But for some spare parts and some prospects (one of whom have elected to play in Russia), we got our captain and leading scorer and a dynamic defenseman who has become the new face of the franchise - and who enjoys playing here. In Atlanta. Where it's warm. Poor Buff.

Ok, not a good memory. Probably the cause of all of our problems right now. Like it or not, the purchase of this team by the Atlanta Spirit Group defined the last six and a half years of hockey on the cheap. They've been trying to dump the team since 2005, which is interesting since that's how long the team's fans have wanted to dump them.

This might seem high for an individual's best game - especially an individual who is no longer with the team - but the Thrashers have been plagued by wonky goaltending since the start of the franchise. Kari's groin problems and consistent injuries made him probably the most frustrating of all of the goaltenders - because he was the best. This game, a 49 save performance that saw his shutout bid broken in the last minute - was an example of what he could do. The Thrashers, as inconsistent as the team is, were able to take it to that season's Southeast Division champions with a dominating performance. It was a rare bright spot for the franchise and for Lehtonen.

Be it about money or the fact that he didn't want to play in Winnipeg, trading your franchise's marquee player and one of the top scorers in the NHL is never a good thing. The trade wasn't botched, but it still hurt to see Kovalchuk drag the fans on all year only to leave to go to New Jersey. Admittedly, not re-signing Johan Hedberg and seeing him go to Jersey hurt more.

As much as it hurt to lose Snyder emotionally (and as much as losing Heatley and Snyder hurt the team's play), the outpouring of emotion and class by the team and the fans is primary proof that not only is Atlanta a perfectly viable hockey town, the small market feel is a family. If the Thrashers do in fact move to Winnipeg, no player should wear number 37. The city's disrespecting Atlanta and the Thrashers enough as is - don't disrespect the memory of a talent lost too soon.

2. The Announcement of the Franchise/The Inaugural Season 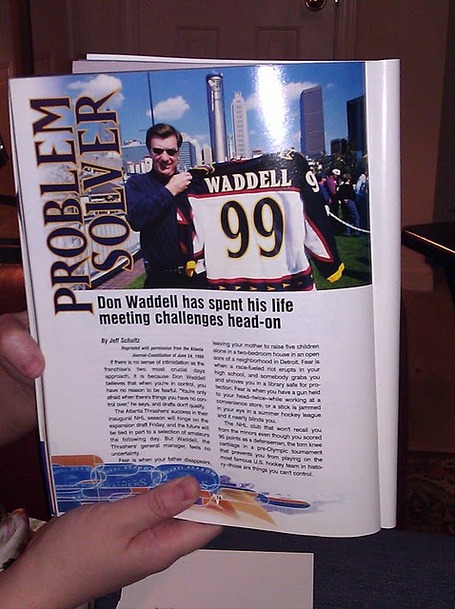 I have never ever been in a sporting arena so loud, so excited... so charged. People point to bad attendance and Atlanta not being a hockey town based on that. All you have to do is look at the team's two sold-out playoff games to realize that hockey's viable. People care - they just tend to care more when the organization recognizes it and rewards them with a solid on-ice product.

Unfortunately, aside from that one playoff series in 2007, we might never get to know what that feels like.