Madden 12 is coming out soon. You'll probably buy it. The new feature that sounds pretty cool is this player traits deal, which aims to make players play differently based on more than just their numerical ratings. Pasta Padre has collected a whole heap of screenshots, including Drew Brees, Josh Freeman, Hines Ward, Michael Vick and other players of local interest; here's the pic he took of Atlanta Falcons rookie WR Julio Jones' traits: 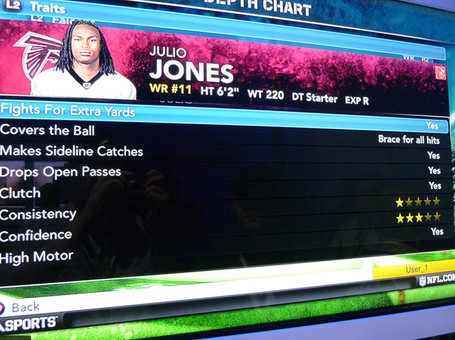 It looks like all rookies have low consistency, while every player seems to start with middling confidence -- I'm assuming that will fluctuate based on performance. No complaints about the assessment of Jones here, though we'll have to wait and see whether his speed, strength, catching and so forth are also fair.
We do know he isn't the highest-rated rookie -- that honor went to Patrick Peterson.
For more Falcons, join The Falcoholic. For more NFL, visit SB Nation's NFL hub.