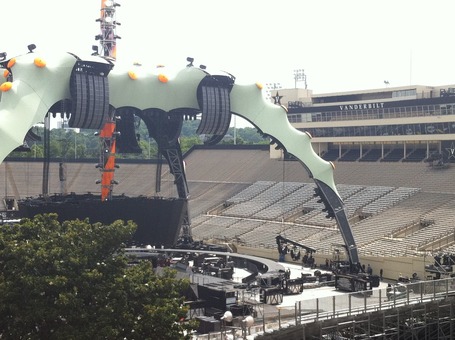 We know what you're thinking, but the NCAA couldn't punish new Vanderbilt head coach James Franklin for creating a "game day atomsphere" in Commodore Stadium because unlike any given Autumn Saturday in Nashville, 40,000 fans are expected to show up to tonight - a first for any event in this facility not involving Alabama football.

The gratiutous humblebrag of U2's "Claw" or "World Peace" or "They won't play anything from the 'War' album, so just skip it" 2011 live tour stops tonight on Vanderbilt's campus, where we assume the only feasible charity Bono could commandeer will be atrophied school spirit (unfortunately July 2 falls squarely in yacht racing season, so good luck).

Salutations to Vanderbilt for generating the publicity and the revenue - helipads don't build themselves, gang - but most importantly for openly violating the Tennessee statute demanding that any concert held in a football stadium inside the state must feature Kenny Chesney.