The Braves have it all working for them right now. Tim Hudson pitched well, the offense continues to score runs, and the bullpen is just as good as it has been all season long. For a Rockies club without Troy Tulowitzki, Carlos Gonzalez and Todd Helton, they honestly had no chance against the hottest team in baseball.

Knowing that he had the next ten days off, Tim Hudson let it all hang loose on the mound and threw 116 pitches while working through 7.1 innings. He allowed just three runs on five hits -- two or three of which were either infield hits or weak bloopers to the outfield -- and three walks. Hudson struck out three in route of his eighth victory.

Rockies starter Juan Nicasio, who throws a fastball about 90 percent of the time, worked through the Braves lineup one time before getting pounded. The Atlanta batters got their timing down and the hit parade was on after two inning. Nicasio lasted just 2.1 innings and have up five runs on seven hits and three walks. He fell to 3-2 on the season.

The Rockies had an early 2-0 lead on Thursday afternoon and both RBIs were courtesy of Jason Giambi, who replaced Todd Helton in the Colorado lineup. That was all the scoring the team would do for a while, though.

Jordan Schafer led off the third inning with a ground-rule double and Alex Gonzalez put together a phenomenal at-bat to drive in Schafer with an RBI-single. Chipper Jones singled and Freddie Freeman smacked an opposite-field 3-run homer to give Atlanta a 4-2 lead. The home run was Freeman's 13th of the season and fourth of the series. Dan Uggla followed with a double and Jason Heyward drove him in with a single to add another run to the scoreboard.

The Tim Hudson show ensued after the offensive outburst and he made relatively quick work of all the Colorado hitters outside of a jam or two.

Jason Heyward hit his ninth home run of the year in the fifth on a no-doubt line drive to right-center field to give Atlanta a 6-2 lead. Heyward should have also had an RBI-single in the seventh, but he was (wrongly) called out at first base on a bang-bang play.

Eric O'Flaherty replaced Hudson in the eighth and allowed a run to score on a wild pitch, but Jonny Venters came in and recorded the final out of the inning with the bases loaded.

Craig Kimbrel came in to close out the game and recorded his 27th save of the season. Not only does it give him the Major League lead for saves, but it also gives him the saves record by a rookie at the All-Star Break with three games to go. The kid is special, folks.

Atlanta wins 6-3 and sweep Colorado out of town.

One of the biggest series of the year begins Friday night in Philadelphia. With the Braves just 2.5 games out of first place, a sweep would put them in first place. At the same time, if Atlanta was to be swept they'd sit 5.5 back and all momentum for the second half would be lost. Needless to say, it's a big series with big implications. First pitch is at 7:10 and it'll be Brandon Beachy against Roy Halladay in a stellar pitching matchup.

FanGraphs Graph of the Game: 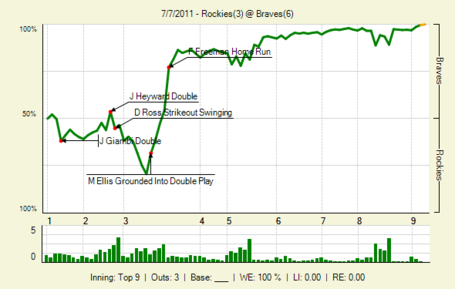