Rory McIlroy hurt his right wrist early in his 2011 PGA Championship run. He struck a tree root during a swing, which caused him clear discomfort in his arm. He's attempting to play on, and has made it through a couple holes so far, though at one point he did request a staff member to take a look and is being followed closely by some sort of personnel. One PGA medical official pulled him aside to test his range of motion while checking for pain.

Here's a picture of Rory paying attention to the afflicted limb, via @WorldOfIsaac: 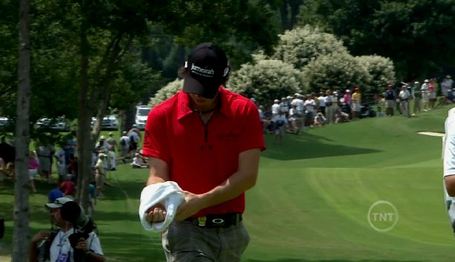 Nobody's going to question McIlroy's toughness and heart after watching him bounce back from his Masters collapse to take the U.S. Open. Bet on him finishing out the first round, but don't be surprised if he's forced to withdraw before action resumes on Friday.

Stay tuned for 2011 PGA Championship updates, and head to Waggle Room and SB Nation's golf hub for more on the PGA Tour.