Longtime (looongtime!) Atlanta Braves manager Bobby Cox saw his No. 6 jersey retired at a Turner Field ceremony Friday night. As dozens of former and current players looked on -- it would be so awkward if current players didn't look on -- Bobby was toasted by Greg Maddux, Tom Glavine, John Smoltz, Chipper Jones and John Schuerholz.

Here's a photo of that number being unveiled: 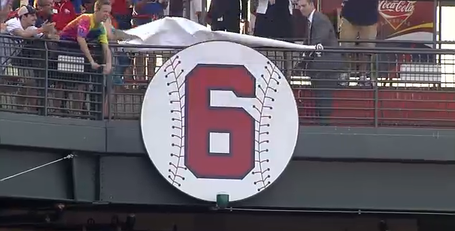 Never one to put up with attention, except when achieving an ejection from a shortsighted umpire, Cox took the mic just moments before the team's game against the Chicago Cubs and delivered this message:

Thank you, Don. And I want to thank Greg and Tommy and John and Chipper ... And this time I want to sort of honor Fredi Gonzalez and his staff and the way they've played this year. I think they deserve a standing ovation.

You know, having your number retired in baseball is one of the highest honors. I have so many peple to thank that helped me along the way. My family, my wife Pam, our eight children for their love and support.

I want to thank Bill Lucas, the winter of 1977 he and Ted Turner gave a really young guy the chance to manage for the first time in the major leagues. I want to thank Terry McGuirk, John Schuerholz, Frank Wren and Bill Bartholomay for giving the tools to this organziation to make this organization a real winner for a number of years.

I want to thank the trainers and doctors for keeping our players on the field.

I want to thank Paul Snyder and his scouting staff and the player development people, that when we got the players here, they were ready to perform Major League-style.

I even want to thank Ed Mangum for making this field the very best in baseball.

I want to thank all the great players and coaches that played for me that made all this possible.

And last, but not least, I want to thank you the fans. You have been so wonderful through everything. This is a day that my family and I will remember forever, and I was fine until they too the curtain off that No. 6. This is one of the greatest days of our lives.

Thank you very much.