Freddie Freeman was the hero on Monday night. Martin Prado took over those duties on Tuesday night and led the Braves to a 2-1 walk-off victory of the Giants, their second straight game in that fashion.

The story early in the game was Randall Delgado's brilliance. He took a no-hitter into the seventh inning before giving up a solo-home run to Cody Ross. The 21-year old out of Panama exited after allowing the run, but he was otherwise spectacular. He struck out four and only allowed one baserunner to reach, which came on a walk. 74 pitches, 45 strikes. The kid is going to be good, folks.

With the score tied at 1-1, each team took a turn putting up zeros in extra innings. Brandon Belt led off the tenth with a walk, but he was erased with a fly out and 6-3 double play. Dan Uggla singled to lead off the bottom half of the tenth and then moved to third on a Freddie Freeman single. Freeman would be thrown out at first after rounding the bag too widely. The Giants walked Chipper to put runners on the corners and Alex Gonzalez promptly hit into a 6-3 double play of his own.

San Francisco was unable to do anything with a one-out single in the eleventh which brought the Braves up to the plate. Jose Constanza grounded out to start the inning, but Brooks Conrad hit a pinch-hit ground-rule double down the right field line. Michael Bourn grounded out softly to put Conrad on third with two outs and Martin Prado coming to the plate.

Prado took a strike to lead off the at-bat and held off a low slider to even the count at one. Giants reliever Javier Lopez threw a belt-high fastball and Prado shot the ball into right field for the game-winning hit. The team mobbed him and Conrad on the field. Kris Medlen even broke out the water: 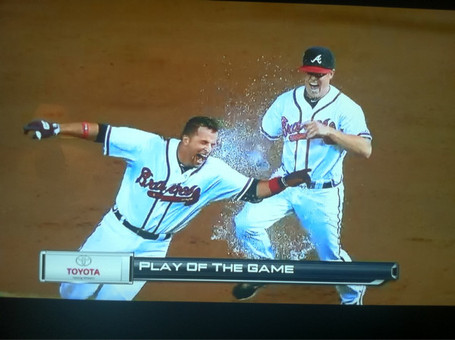 The Braves now have a six game lead in the wildcard race. The Phillies also lost, so Atlanta moves to 7.5 back in the NL East.