A few weeks before his Pro Football Hall of Fame induction, former Atlanta Falcons great Deion Sanders said his bronze bust would pay homage to his early years by way of its hairstyle, which happened to be played in Atlanta. A man as image-conscious as Sanders couldn't possibly pass up a chance to see his youthful Jheri curl cast in metal and preserved forever, but it makes for a nice little wink to the city of Atlanta while we're at it.

NFL Hall of Famers don't get to pick which team they're inducted as, but this might be one of very few cases in which a player can be claimed by a particular team based on hairstyle alone. Here's a quick photo of bronze Deion as unveiled next to gold-jacketed and -shoed Deion:

Update: After his speech, he put a bandana on it (via @bubbaprog): 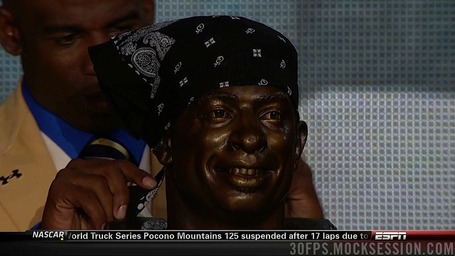 If I didn't know that was supposed to look like Deion Sanders, I probably wouldn't have been able to guess who it represents. We all try our hardest.