Kenny Powers Comes To NASCAR: It Was Inevitable [PHOTO]

Share All sharing options for: Kenny Powers Comes To NASCAR: It Was Inevitable [PHOTO]

Odds are that if you're reading this, you're at least somewhat aware of the HBO series Eastbound and Down, specifically Danny McBride's lead character Kenny Powers -- possibly the greatest character to enter pop culture in the new millennium. As a character that wears his redneck pride on his sleeve and holds himself up as the king of all things loud, fast and out of control, it was only a matter of time before he found himself emblazoned on a NASCAR Nationwide Series car.

In Saturday's DRIVE4COPD 300 race at Daytona International Speedway, T.J. Bell will drive the No. 50 car with the MAKE Motorsports paint job you see here: 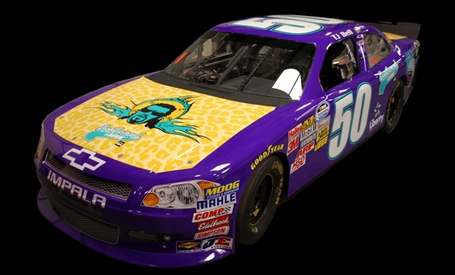 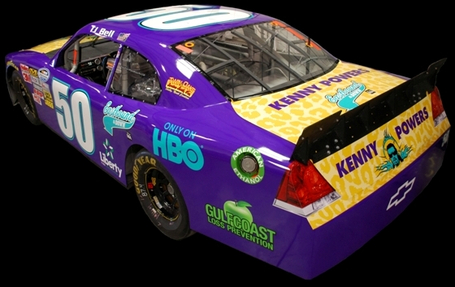 The color scheme will be familiar to fans of Eastbound and Down, as it pays homage to Powers' beloved jet ski. "Powers" had this to say in the press release announcing the car:

The name and likeness of Kenny Powers have long been associated with victory and success. It's pretty obvious why somebody would want to put a giant picture of my face on a tastefully decorated stock car.

Best of luck to our driver, T.J. Bell. If he doesn't win first place at Daytona, they must not have made that picture of my face big enough.

For all news and information regarding the DRIVE4COPD 300, please visit NASCAR Ranting and Raving or check out SB Nation's dedicated NASCAR hub.