Falcons Vs. Broncos Recap: The Good Defense, The Bad Manning, And The Ugly Refs

The now 2-0 Falcons played an impressive game in their 27-20 win over Peyton Manning and the Broncos on Monday Night Football.

Share All sharing options for: Falcons Vs. Broncos Recap: The Good Defense, The Bad Manning, And The Ugly Refs

I'm rarely one to say "I told you so," because games these days are so unpredictable.

But what the heck, why not? It's definitely a less dangerous way of celebrating than whatever Michael Turner did on Tuesday morning.

The following is from the Falcons-Broncos preview I wrote back in August:

"It took [Adam] Wainwright almost four months before he was finally pitching at the expected level, at peak performance. And that was one surgery. Manning had four surgeries on his neck, at age 36 no less. Four! He missed an entire season of football. He's playing for a new coach on a new team with new receivers. Chances are, he'll be rusty."

And that's exactly what happened. Home-field noise hindered Manning's ability to audible at the line. The no-huddle was kept at a snail's pace. The offense fell out of sync from the very start.

Soon Manning's passes were looking like my little sister was throwing them. Three interceptions later, John Fox was back to calling plays and giving Willis McGahee every carry he could muster. The first quarter was so shocking, all ESPN commentator and frat-boy wannabe Jon Gruden could manage to say was "look at these Falcons."

Indeed. Look at these Falcons. Or rather...

Look at this defense

On third down of the opening drive, all it took was a simple fake blitz. William Moore was within five yards of the line of scrimmage, but as soon as Manning called for the snap, he ran back towards Jacob Tamme and jumped the seam route. Deadly.

Moore would add eight total tackles, a couple of forced incompletions, and a key third-down sack of Manning in the fourth quarter to make his night a stellar one. 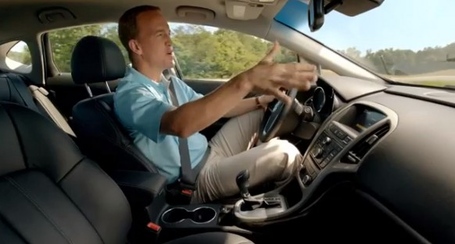 via gmauthority.com "I can even use this Buick to run John Fox over!" - Peyton

Sure, John Fox's "run-for-three-downs" tendencies may have stifled the offense, but the Falcons were making great plays all over the field.

Dunta Robinson and Asante Samuel made some phenomenal open-field tackles. Sean Weatherspoon and Stephen Nicholas were running all over the field: batting down passes, forcing fumbles, you name it.

And lest we forget the Falcons sacked Manning, who plays behind a very good offensive line, three times. Jonathan Babineaux and Vance Walker both got great pressure up the middle during the second half.

I wouldn't say it was the most complete defensive effort I've seen this team put together. McGahee managed to have perhaps the quietest 100 yard game possible, with everyone on ESPN still undyingly devoted to covering Manning, and the front seven's tackling was hit-or-miss at times.

The Falcons couldn't expect to shut Manning down for all four quarters, either. But what they did do is create enough havoc in the first two that it wasn't even necessary. That's mostly because...

The offense got the job done

The Falcons offense didn't show up like they did against the Chiefs. Dirk Koetter's play-calling seemed a bit too conservative at times, the Falcons receivers dropped way too many passes in the first half, and the team's running game was once again stagnant and ineffective.

They could've easily made it 30 points in the first half instead of 20 after the defense managed to force four Broncos turnovers. At several points, the Falcons receivers just couldn't seem to get open.

But when the Falcons needed to score, Matt Ryan got them there. He completed over 65% of his passes for 219 yards and two scores, a rather vintage Ryan performance that still resulted in a win.

Roddy White and Tony Gonzalez both had stellar games. It's almost as if we take their excellence for granted now, but a combined 15 catches for 172 yards and two scores from that duo was a huge difference maker in this victory.

And last but certainly not least, the offensive line deserves some huge praise. Two sacks allowed this entire season. Sam Baker held his own against Elvis Dumervil, and the rest kept another very good pass rusher in Von Miller nearly sack-less. A nice day for the starting five, all in all.

There was, however, one aspect of Monday's game that seemed to make it so, so unenjoyable. What was it again?

Roger, where is our officiating?

I tolerated one week of this nonsense. But the replacement referees almost ruined the Monday Night game this week.

The call above that John Fox is so vehemently arguing was actually one the refs made correctly: the Broncos had 12 men on the field.

But it was the arguing by Fox, the massive momentum killers whenever the refs made a call or reviewed a play, their inability to control the players, the sheer number of penalties and of course the incorrect calls that made this game a four hour long agony-fest.

Take, for instance, the Broncos' only scoring drive of the first half. Peyton Manning found Demaryius Thomas for a touchdown with very little time remaining before halftime. But on that very same drive, the refs literally gave Denver six free yards after the fourth-down holding call on Dominique Franks.

I won't be biased. The Broncos were at the receiving end of some poor calls as well. But that's not the point I'm trying to make.

The NFL's unwillingness or inability to compromise with the referee holdouts is damaging the integrity of the game. They're affecting game outcomes, player's careers, and most of all fan enjoyment.

Can we really expect to believe the league is sincere about player safety, all the recent rule changes and bountygate suspensions considered, when they'll put shoddy refs on the field until the old officials take what Goodell offers?

The national spotlight is on Atlanta

Regardless of the poor officiating, the Falcons made a statement win on Monday night. They are 2-0, and beat a strong Broncos team that should at the very least take the AFC West crown this season.

Injuries are still a concern. Chris Owens has a concussion, so they'll be relying heavily on Dominique Franks and Robert McClain in this week's game in San Diego.

Despite all of that, the 2012 Falcons are for real. This was a truly impressive win.

For more on the Atlanta Falcons, head over to The Falcoholic, and be sure to check out SB Nation's dedicated NFL hub for news and notes from around the league.