The Falcons defensive end was arrested on Monday Night, making it two Atlanta arrests in the past two weeks.

If this were college football, take the University of Georgia for instance, your average sportswriter would probably slather his or her article with cries of "Mark Richt has lost control of this football team!"

Whether that is a valid claim or not in college, this is the NFL. The league is filled with over 700 professional football players. This is their career, their livelihood. They are adults that are and should be fully responsible for their actions. It is neither Mike Smith's nor Thomas Dimitroff's job to babysit the players beyond the boundaries of the gridiron.

With that said, this arrest should be treated a little differently than Michael Turner's DUI. Why? Because Abraham was arrested for obstruction of justice. The police report stated:

" [Abraham] had a strong odor of alcoholic beverage coming from him, his speech was extremely slurred, his eyes were bloodshot and he was unsteady on his feet"

Given the context of the arrest, that could mean almost anything. Abraham was arguing with a police officer, which is stupid in itself, and was perhaps making the police department's job regarding the suicidal woman more difficult in doing so.

But in this case, a good deal of that report could have been left up to the discretion of the arresting officer. It's unfortunate that Abraham put himself in a situation where he could be arrested. You would think that by 30 years old, a player would know his alcoholic limits.

But I don't believe that's why Abraham was arrested. I think this is a case of police getting fed up with someone who was bothering them, and so they slapped on a couple of obstruction charges to get him off the scene.

Could he have been little drunk or high at the time? Sure: 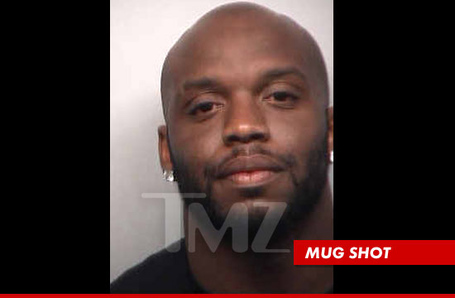 via ll-media.tmz.com "Can't make it to practice coach, I'm baked" - NOT John Abraham

But he wasn't driving, or speeding, or assaulting anyone or robbing anyone. This is very, very minor in the grand scheme of things, and I don't think this should so easily be grouped into the "players are out of control" mania.

Still, this arrest came at a pretty unfortunate time, in the wake of Turner's only a week ago. I fervently hope this doesn't become a weekly arrest column.