Falcons vs. Panthers preview: Cammy Cam comes to town (and so do real referees)

The undefeated Falcons will face the struggling division rival Panthers at home in the team's 2012 NFC South opener, and non-replacement officials will be on the field. But is Cam Newton the man Atlanta should really worry about?

Share All sharing options for: Falcons vs. Panthers preview: Cammy Cam comes to town (and so do real referees)

The Falcons are faced with a tougher task this week than some expect.

Playing an angry team, let alone a division rival, are two key ingredients to any good upset. Even the hapless Cleveland Browns managed to put up a very convincing fight against a Ravens team many believe will win the Superbowl.

So could the 3-0 Falcons, whose rushing defense is currently allowing an average of 128.4 rushing yards per game this season, be sleeping on a Panthers team that was just embarassed by the Giants in front of a national audience? You bet.

In both losses this season, the Panthers have been held to 60 rushing yards or less. In fact, the Buccaneers managed to hold Carolina to a total of 10 rushing yards during their season opener.

Even though folks like to call this Cam Newton's team, his success is still very much predicated on Carolina's ability to run the football with DeAngelo Williams and Jonathan Stewart.

If the Falcons can limit the two-headed rushing monster and force Newton to become one dimensional on offense, I needn't remind anyone that Newton was picked off by Atlanta five times last yeason. The game would be Atlanta's for the taking.

That is much easier said than done. The Falcons allowed Willis McGahee to quietly romp for 113 yards and two touchdowns in the Georgia Dome two weeks ago. Jamaal Charles managed a respectable 87 yards in the season opener, as well.

But if last week's defense shows up, the one that held San Diego to three points and took Ryan Mathews out of the equation early, Mike Smith & Co. have nothing to worry about.

The Falcons offense may be without Lousaka Polite and Michael Palmer, but with Carolina's talented linebacking corps a little banged up, things should even out, and Matt Ryan will likely continue his already stellar production. Carolina's No. 18 pass defense shouldn't be too daunting for the Duece.

Thankfully, the level of officiating will no longer be an (unbearable) issue this season. No extra six-yard penalties for this Falcons team. I'm sure the 70,000+ fans (including myself) who voiced their opinion to NFL commisionser Roger Goodell had at least something to do with the quick resolution.

Ye left us too soon, replacements: 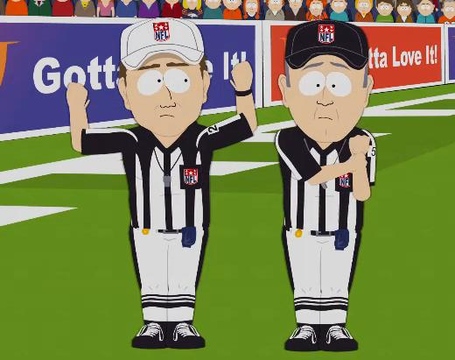