Share All sharing options for: MLB 11: The Show Trailer And Jason Heyward Screen

That's two 2010 playoffs series and five 2010 playoff teams depicted without any Atlanta Braves, but that's fine. And yes, Sony's ad bros are kicking themselves for not having time to include Cliff Lee in a Phillies uniform as a packed house* looks on. After the jump, we do have a work-in-progress promo image of Jason Heyward tracking a deep fly ball at a Cokeless Ted. Trailer: 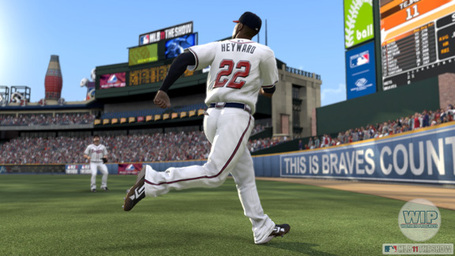 Mauer is your cover man for this year's edition, just holding the spot for J-Hey. It's got a bunch of new features that don't make sense to me because they don't sound like anything that happens in NCAA 11, but here are those.