MLB 2K11 is set to release on March 8. Pasta Padre has already collected player ratings for almost every team, including the Atlanta Braves. Jason Heyward (88) and Dan Uggla (84) are the Braves' highest-rated position players, followed by Martin Prado (82) and an underrated Brian McCann (82).

Tim Hudson (87) and Tommy Hanson (87) lead an E-pitching staff with few weaknesses but few real strengths. Craig Kimbrel, Jonny Venters, and Jair Jurrjens all head into battle with ratings in the low-80s.

While we can't yet see each player's batter ratings or the pitchers' pitch ratings, there's still those overall ratings, plus some fielding, catching (relevant only to catchers!) and running ratings. Freddie Freeman looks to be the most complete fielder, while Heyward is rated as the team's best athlete.

And in case you're wondering, the team's worst 2K11 players are Diory Hernandez, Joe Mather, and Scott Proctor, all 63.

While you're here, take a look at those ratings for the Philadelphia Phillies rotation. 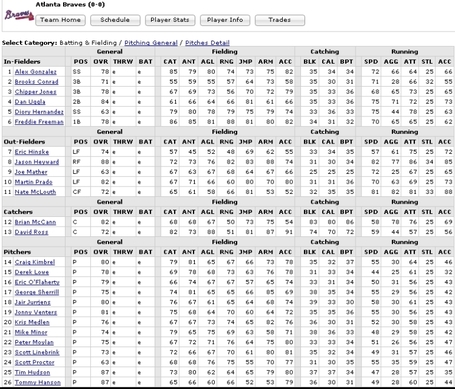