Share All sharing options for: The Ron Gant-Kent Hrbek Bobblehead That'll Make You Hate The Twins All Over Again 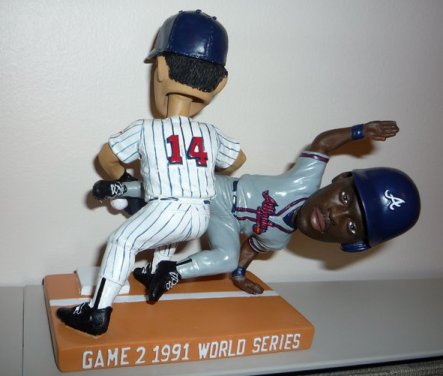 That Minnesota Twins bobblehead you've seen, the one honoring Kent Hrbek's bizarre molestation of Ron Gant's leg during the 1991 World Series? Yeah, it wasn't made by a Braves fan with a sense of humor -- it was officially commissioned by the Twins themselves.

I can't find video of the mugging, but still photos are about as confounding as the image of the bobblehead above. Here's a video of the channel 5 report from the night of the game. They get around to talking about the call around the 3:20 mark, but be sure to marvel at the sensational mullet on the first outraged representative of Braves Country:

Any and all slight sympathies anyone in the entire Southeast has ever had for the Minnesota Vikings losing the 1998 NFC Championship Game to the Atlanta Falcons partially due to Gary Anderson's miss ...  these sympathies no longer exist. The longer I stare at that bobblehead the more I hope Brett Favre comes back to torment Minneapolis for one more season.