Share All sharing options for: Quentin Moses, Georgia Football: The Greatest No. 94 In Georgia Sports History

Of all the tasks one could be assigned on Georgia's football team, one of the most thankless had to have been filling the shoes of David Pollack, not only a fierce player but an all-time fan favorite to a degree surpassed only by the Herschel Walkers and Charlie Trippis of UGA lore.

So in a weird way, perhaps it is to Quentin Moses' credit that he never bothered fighting the futile battle to match Pollack's charisma when he took over #47's position at defensive end in 2005. He just hunkered down and went about his business -- destroying quarterbacks -- and ended up leading the team with 11.5 in his first season as a starter. (Georgia fans, though, had already gotten a taste of what was to come when Moses came off the bench in the penultimate game of the '04 season to sack Georgia Tech's Reggie Ball three times.) 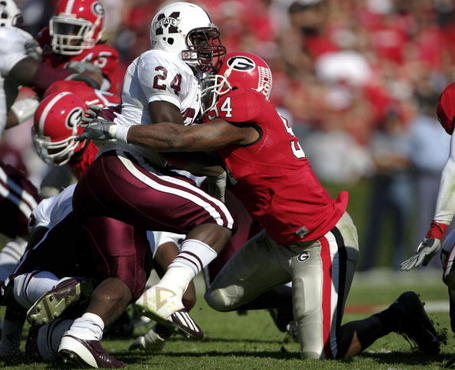 That's kind of how Q-Mo's whole Georgia career went -- not much talking, none of Pollack's dancing off the field after big third-down stops, just a lot of swallowing up ball carriers and giving opposing QBs some real incentive to add a few extra steps to their drops in the pocket. By the time he graduated, Moses had taken his daunting task and spun it into a consensus first-team All-SEC selection and a spot on Playboy's All-American list.

Not bad for a kid who actually wanted to play basketball when he graduated from high school.