Share All sharing options for: Richard Seymour, Georgia Football: The Greatest No. 93 In Georgia Sports History

I don't remember much about the 1999 Dawgs, other than how much it sucked for me to have to drive all the way from Virginia down to Georgia just to see Kevin Ramsey's defense get chewed up and spit out by the likes of Auburn or Georgia Tech. Seriously, we put up some absolutely fecal performances that year, to the point where one seriously had to ponder whether maybe Ramsey hadn't been a sleeper agent all along, whom Tennessee allowed us to hire away only so that he could serve as an "inside man" cutting wires and setting time bombs in our secondary.

Why am I mentioning all this when I'm supposed to be talking about how awesome Richard Seymour is? Because while the pass defense imploded almost from the jump, giving up more than 3,000 passing yards on the season for the first (and so far only) time in Georgia history, the front seven had their best performance in 15 years against the rush and plastered opposing QBs to the tune of 33 sacks. Seymour led the team in tackles (including 10 for loss) and tacked on four sacks, seven QB pressures and a pick. 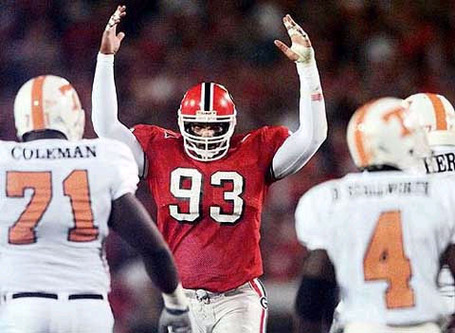 Seymour finished his Georgia career (1997-2000) as a four-year letterman, a two-time All-SEC first-teamer and a first-team All-American as a senior. After being selected with the sixth overall pick in the subsequent NFL draft, he earned a starting job on the Patriots' D-line -- and a Super Bowl ring -- as a rookie. He's since earned two more rings, six Pro Bowl invitations, and a spot on the NFL's 2000s All-Decade Team.

Now with the Oakland Raiders, Seymour is a likely candidate to become Georgia's third Pro Football Hall of Famer once he retires.

Some might say the Raiders are an ignominious way for a Bulldog great to finish out his pro career, particularly since his second year in Oakland was marked by an ejection for slugging QB Ben Roethlisberger in the midst of a blowout loss to the Steelers in November. Then again, if you're from Milledgeville, that might only add to Seymour's legend.