Share All sharing options for: Richard Tardits, Georgia Football: The Greatest No. 92 In Georgia Sports History

Richard Tardits has one of the best origin stories in Georgia football history. Visiting family in Augusta from his native France, he up and decided to attend UGA and try out for the football team. Vince Dooley was impressed with the rugby player's toughness and athleticism, and decided to give him a shot even though the Frenchman's only football knowledge was from books and highlight videos.

Upon being told he could play special teams, Tardits asked whether that counted as football. He played his way onto the starting defensive line, and everything worked out better than expected. "Le Sack" went on to tie the school's all-time career sacks record, which stood until David Pollack came along. 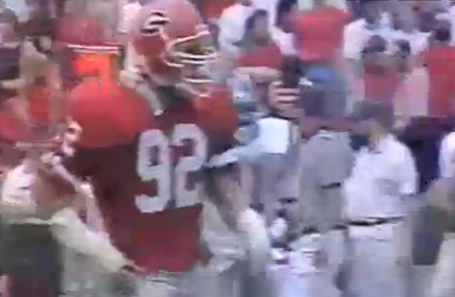 After earning dual degrees at the university, he played a few seasons for the New England Patriots. He then joined the United States rugby team for six years, helping to lead the team to the 1999 World Cup. These days he seems to serve as France's official American football expert.