The Atlanta Braves and Philadelphia Phillies will wear Negro leagues throwback uniforms for Saturday's tribute game, which is part of the 2011 Civil Rights Game weekend. This is the second time these teams have met in Negro League wear; in 1997 at Turner Field, the teams wore 1938 Black Crackers and Philadelphia Stars jerseys to honor the 50th anniversary of Jackie Robinson entering the majors.

Here's a picture, via @braves, of Jason Heyward's Black Crackers jersey for Saturday: 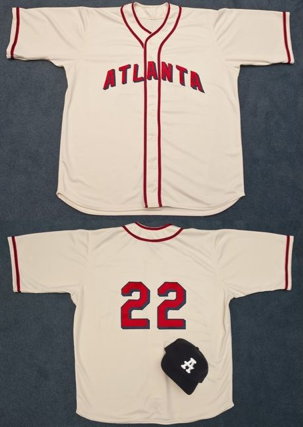 A little bit of history of the team:

The Black Crackers were birthed in 1919 from the Atlanta Cubs, a semipro team that emerged from Atlanta's late-nineteenth-century HBCU baseball community. The team lasted through 1952, joining the Negro Southern Leage in 1920 and the Negro American League in 1938, where they played the Stars.

In 1938 they declared themselves the NAL title-holders once their championship series against the Memphis Red Sox fell through due to scheduling difficulties.

They're believed to have taken their name from the minor league Atlanta Crackers, with whom they shared Ponce de Leon Park, since locals referred to the Negro leagues team as such anyway. The Crackers were Atlanta's biggest pro baseball team until the Braves came to town, eventually leaving town and returning as the Gwinnett Braves.