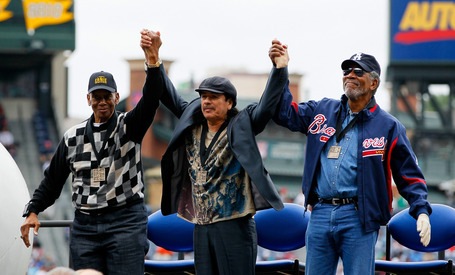 Carlos Santana, you should've known an event called the Civil Rights Game would be a terrible venue at which to speak your mind about civil rights issues. While on stage with Hank Aaron, Ernie Banks, Morgan Freeman and others to receive some such awards for whatnot, Santana used the forum to say, "The people of Arizona and the people of Atlanta, Georgia, you should be ashamed of yourselves."

The state of Georgia recently passed a controversial immigration law similar to Arizona's, which was itself highly controversial.

Santana then held a press conference after the game to hypothesize about what would happen to Georgia if Hispanic workers stopped contributing. He also broke out the "If people want the immigration laws to keep passing, then everybody should get out and leave the American Indians here" line, which has always been my personal favorite.