The Class-A Rome Braves have a handful of prospects within the top 15 in the system, including a couple that should not be overlooked.

A recent rush of highly touted Braves prospects have either reached the majors or are on the brink, which has resulted in a high ranking for the Atlanta farm system over the last couple years. Such names as Jason Heyward, Freddie Freeman, Brandon Beachy, Mike Minor, Craig Kimbrel and Julio Teheran have given the rankings a strong backing. But what about the next wave of prospects?

While the 2011 version of Class-A Rome does not have the bolstered rosters of previous seasons, it still boasts a handful of prospects worth watching. Let this be a guide for you to better understand that handful as I recently took in a series against the Augusta GreenJackets. 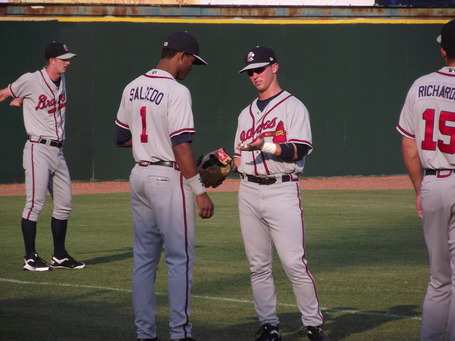 Certainly the biggest name of the current Rome players, Salcedo was signed for $1.6 million prior to the 2010 season and was ranked in the top 10 of most Braves prospect lists, including No. 5 on mine. You might find my ranking to be a little higher than most, but that's due to my love for the big 19-year-old shortstop.

Salcedo has seemingly turned things completely around in his second stint at Rome, currently hitting .286/.367/.414 with two home runs and 14 RBIs, including 16 walks to 29 strikeouts. Salcedo went on a recent stretch of 7-12 with a homer and four RBIs, but he has gone hitless in his last three games.

The big shortstop likely won't be a shortstop as he progresses, and that was apparent in his range while playing the position. He was able to get to a couple balls in the holes thanks to his athleticism, but his size will eventually move him to third base. He has already played a few games at third, though I have yet to see how he has handled the position. One other thing to mention with his defense is his long throwing motion, which will only hurt him more at third. He has a strong arm, but the motion takes some of that effectiveness away.

Salcedo seemed like a new hitter in the box of what I saw. He came up with more aggressiveness, taking harder cuts and seeing the ball much better. After hitting off his front foot so much last season, it was a pleasant sight to see him sit back and rotate his body to the ball so well. I absolutely love the front knee turn as his timing mechanism, which goes well with a solid load. Also, the slight back knee twinge wasn't as evident from what I could tell.

Despite the excellent load, Salcedo still has a long swing at times, and it's not likely to get much better as he moves up. This will help lead to higher strikeout totals. But he is recognizing pitches better the second time around at Class-A, which is a good sign.

Why people aren't higher on this kid is confusing to me. He has a very strong upper body, including very broad shoulders, and his size projects to be monstrous. Yet, he is very athletic for his size, reminding me some of Heyward, only thicker. His size and swing projects for big power as he progresses, and while strikeouts will likely remain an issue, he has shown the ability to recognize pitches well. Salcedo has a chance to be one of the best position prospects in the game within a couple years if things fall into place. Don't sleep on him. 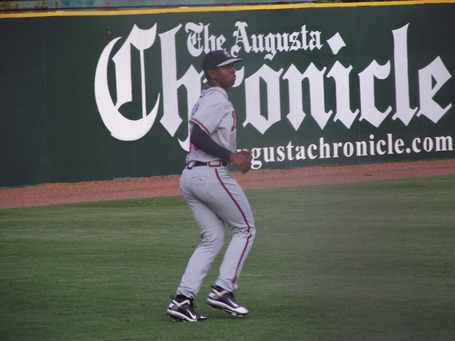 Video 1 of Perez.
Video 2 of Perez.
Video 3 of Perez.
I came into this series very excited to see Perez, hearing great things about him all last year. He didn't disappoint, either, going deep into the game and fighting hard in the final innings, allowing just one run and two hits in seven innings while striking out seven.

Perez's size reminds me of a thicker Teheran. He has a similar build in the upper body, but his legs seem to be thicker than I remember Teheran's being, always a good sign meaning good durability.

Perez has a long crossover stride, ending violently as he falls off the mound to the side at various angles. His body stays high during the stride, causing a long motion for his arm as he reaches extension. I noticed a tendency to finish high and not follow through, which is a result of such a motion, and repeating mechanics may be something he struggles with when he can't command well. At the same time, the motion is deceiving and tough to pick up on, especially for lefties.

Perez's fastball sat in the upper-80s/lower-90s with little tail, and it showed spotty command at times, but overall it's a good fastball. He has a big over-the-top curve that breaks slowly, and he showed decent command of the pitch when I saw him. When he has a feel for it, there's no doubt the potential is there for a plus curve. The changeup is 5-10 MPH off the fastball and shows a tumbling action away from right-handed hitters. It's not a tremendous pitch, but it's more than a show-me changeup, and it gives Perez two offerings aside from the fastball that he can attack hitters with. The fact that Perez has these two solid offerings without either being show-me material boosts his value.

Perez's potential seems to be that of mid-rotation to me. His pitches are pretty polished for his age, and he seems to suffer from just the usual command/control issues for his period of development. I'm not fond of his mechanics because they require a lot of athleticism to repeat (overthrew in the late innings, relied heavily on the changeup late), but if it works for him, so be it. He's certainly worthy of a top 10 pick in the Braves system.

Matt Lipka:
Video of Lipka.
Much has been made of Lipka's lack of pop so far this season, recording 34 hits - all singles. I was able to witness this firsthand and came away with the same impression - no explosiveness in his swing.

Lipka's lack of power seems surprising, but one look at his swing tells you why. He is doing what I like to call "pushing the bat." I have plenty of experience with this considering I did it my entire playing career. He's simply pushing the bat to the ball without swinging through, making contact but with no authority. It leads to a lot of grounders and short line drives.

Lipka does have a short, quick swing with good hands. He seems to recognize pitches pretty well, and he makes contact well due to good hands, but there is just no authority in his swing. It's something that can be fixed, and I hope it is soon. Otherwise, he has almost zero value as a prospect.

Christian Bethancourt:
The young catcher has been a cause for concern lately due to a lack of progression, as well as a lack of enthusiasm. Some of that was on display in the series I attended, as Bethancourt let several pitches in the dirt get by him due to not shifting his feet, and he also just flat out dropped a few pitches. Bethancourt has a reputation for being an elite defensive catcher, and an 80 arm is evidence of this, but he also has lazy footwork at times.

Bethancourt's offense is a different story. He has yet to show much progression at the plate, not recognizing pitches at all. His bat lags without much load, causing some difficulty to square pitches up on. However, he did show some pop with a couple hard hit balls, including a liner up the middle that he drilled.

Bethancourt continues to be a mystery in regards to his offense, but his defense is what brought him to this point anyway. I think he will continue to develop defensive wise and that will keep his value high, but his offense is in serious question.

David Filak:
Video 1 of Filak.
Video 2 of Filak.
I may be higher on Filak than most, ranking him ahead of Brett Oberholtzer at No. 13 prior to this season, but I'm just a sucker for big righties with sinking ability. Filak didn't do much when I saw him to help his case with me, though.

Filak lasted just 1.2 innings, allowing five runs and five walks. He had nothing going for him and no feel for his pitches. He couldn't get on top of anything, lagging his arm pretty bad and throwing everything up.

But the brief flashes of competent pitching showed good things. He has a sinking fastball that runs 90-94, inducing good amounts of grounders. His curve and slider have good late movement, including a slider that bites pretty hard at the plate. The only real difference between the two pitches is velocity and a break that is slightly earlier on the curve.

Filak has shown signs of being a top 10 pitcher, but his stint at Rome has not proven it. I remain high on him after seeing the flashes of brilliance, however.