Braves Catcher Brian McCann Is On A Hall Of Fame Pace

Brian McCann is a special baseball player and is in some special company at this stage of his career.

Share All sharing options for: Braves Catcher Brian McCann Is On A Hall Of Fame Pace

Where to begin with Brian McCann? He's everything a fan would ever want in a player, the ultimate teammate in the clubhouse and is affectionally nicknamed "Heap" by those who know him best. He seemingly always comes up with the big hit when the team needs it most and has received high praise from Hall of Fame pitchers John Smoltz and Tom Glavine.

To put it simply, Brian McCann is an incredible baseball player and he's well on his way to a Hall of Fame career. And don't just take my word for it; the stats back it up. 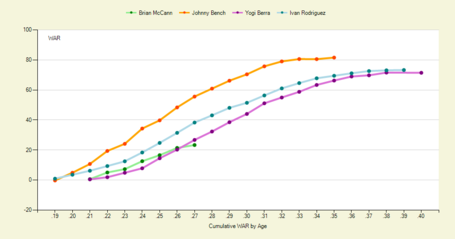 First of all, that Johnny Bench was one heck of a catcher, wasn't he? Those numbers are ridiculous. One can only imagine what Bench could have done should he have stayed healthier towards the back-end of his career.

Anyway, back to Brian. He's right there with Yogi Berra and Ivan Rodriguez, two incredible catchers in their own right, and if this 2011 season is any indication, McCann's best days are ahead of him. He's currently on pace to match or even surpass the best years of his career (4.1 WAR in 2010, 4.0 WAR in 2008, 1.5 WAR in 2011; all WAR numbers courtesy of Baseball-Reference). Baring severe injury, McCann should pass Berra in terms of WAR at this stage of his career and he's not far behind Pudge, even though Rodriguez started his career at the age of 19.

Brian obviously has many years ahead of him and it'll be difficult to continue his historic pace at the plate, but with McCann just about to enter his prime, it probably wouldn't be smart to bet against him. He's a special offensive player.

Finally, it wouldn't be fair to judge Brian McCann and all of these other Hall of Fame catchers without at least paying some respect to their defensive numbers. There's absolutely no question McCann isn't the most gifted catcher behind the plate and the advanced metrics would tell you he's a slightly below-average catcher.

At the same time, though, just how well can a few stats determine a catcher's defensive value behind the plate? There are so many variables at any given time of any given game in any given season, and outside of watching each and every game for those situations, how can you tell just how good a player is defensively when he doesn't move more than a foot for a majority of the game?

Sure, one guy might have a stronger arm than another to throw out potential base stealers, but how do you account if a pitcher is slow to the plate or if the runner got a big jump off the bag? How do you measure a catcher's impact on the game when he pats a young pitcher on the back during a mound visit and gives him advice on how to face the upcoming slugger?

You simply can't over the course of a 162-game season, and while the defensive metrics are a nice statistic to have, it's impossible to truly judge a catcher's defensive value by a few numbers. Use them, but don't overuse them.

Everything aside, Brian McCann is a special baseball player. He's stayed healthy throughout the first five seasons of his career and his prime is right around the corner. He does a tremendous job handling his pitching staff and Brian's hard work and dedication have received nothing but high praise from his teammates and coaches. Combine these aspects of his game with his impressive numbers and you're looking at a guy who has the potential to be one of the better catchers of all-time.